Stone Age chewing gum holds clues to the life of a young girl who lived 5,700 years ago 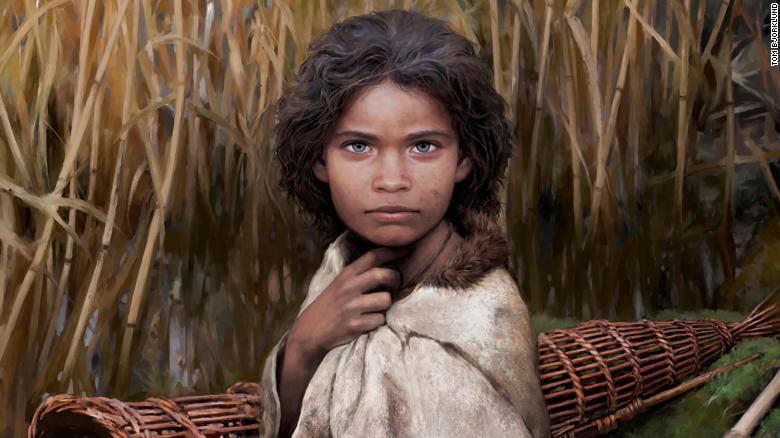 This is an artistic rendering of Lola, a young girl who lived 5700 years' ago
(CNN) -

Lola, a young girl who lived in Denmark 5,700 years ago, had blue eyes, dark skin and dark hair. Her last meal included hazelnuts and mallard duck but no milk -- she couldn't stomach dairy.

And the reason we know any of this is because she chewed on birch pitch, a material that functioned a bit like an ancient chewing gum.

A study of that birch pitch has uncovered the girl's entire genome and oral microbiome, marking the first time human genetic material has successfully been extracted from something besides human bones. The study published Tuesday in the journal Nature Communications.

Birch pitch was what Palaeolithic people used as glue as many as 760,000 years ago. It was derived by heating the bark of birch trees, and somewhere along the way they realized they could chew it -- as indicated by teeth marks found on ancient remnants of the pitch.

(Re)Imagining Wealth - One Pie at a Time

For the Elsen sisters, wealth became more than money when they opened their pie shop, Four and Twenty Blackbirds. Watch to see how they are reimagining wealth.

A small hunk of brownish-black birch pitch was found by archeologists from the Museum Lolland-Falster at the Syltholm site on Lolland, the fourth largest island of Denmark. Small lumps are common at archaeological sites in Scandinavia, according to the study.

"Syltholm is completely unique. Almost everything is sealed in mud, which means that the preservation of organic remains is absolutely phenomenal," said Theis Jensen, study author and postdoctoral researcher at the University of Copenhagen's Globe Institute, who excavated at the site.

"It is the biggest Stone Age site in Denmark, and the archaeological finds suggest that the people who occupied the site were heavily exploiting wild resources well into the Neolithic, which is the period when farming and domesticated animals were first introduced into southern Scandinavia."

By extracting DNA from the birch pitch, the researchers learned that it had been chewed by a female genetically closely related to hunter-gatherers from the European mainland, rather than those in central Scandinavia. Specific genes told them about her hair, skin and eye color, similar to that of other European hunter-gatherers.

"It is amazing to have gotten a complete ancient human genome from anything other than bone,'' said Hannes Schroeder, study author and associate professor from the Globe Institute at the University of Copenhagen. "What is more, we also retrieved DNA from oral microbes and several important human pathogens, which makes this a very valuable source of ancient DNA, especially for time periods where we have no human remains."

Plant and animal DNA trapped in the pitch also revealed that she had eaten hazelnuts and duck, likely staples of her diet.

The ancient chewing gum acted as a time capsule, storing information about her oral microbiome -- the bacteria that lived in her mouth -- as well. The researchers were able to detect traces of DNA that revealed pathogens, including potential Epstein-Barr virus, one of the most common human viruses that can serve as the gateway to mononucleosis, also known as glandular fever. They also found the signature for pneumonia.

Lola was lactose-intolerant, which aligns with the idea that adults evolved the tolerance after dairy farming spread during the Neolithic revolution.

"Our ancestors lived in a different environment and had a different lifestyle and diet, and it is therefore interesting to find out how this is reflected in their microbiome,'" Schroeder said. "It can help us understand how pathogens have evolved and spread over time, and what makes them particularly virulent in a given environment. At the same time, it may help predict how a pathogen will behave in the future, and how it might be contained or eradicated."

Birch pitch was used to help attach stone tools to handles and straps. Although malleable when heated it solidified as soon as it cooled, leading some researchers to believe that ancient people chewed on the pitch to keep it soft while they worked on their tools.

They also theorized that birch pitch was chewed to help relieve the pain of a toothache; act as a tooth brush; stave off hunger; or, much like we use modern gum, simply to have something to chew. Birch pitch also contains betulin, which acts like an antiseptic.

Some of the bacteria detected in the pitch indicated signs of gum disease, which may be why Lola -- named for where she was found on Lolland -- was chewing it.

The discovery of the birch pitch sheds light on one person who lived at the site, which is notable because no human remains have ever been recovered there. And more discoveries at other sites in the future could do the same, bringing ancient humans back to life when no other remnants of their lives are left behind.