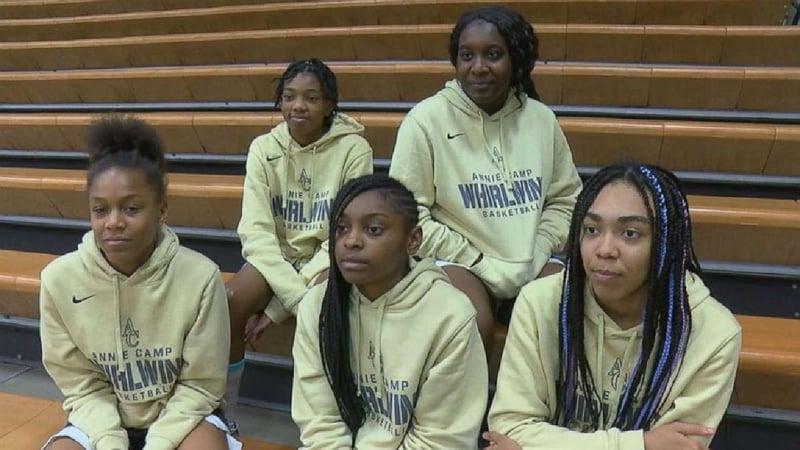 Five young girls in Arkansas are being praised for springing into action after spotting a man who appeared to be trying to take his own life.

Allannah Orsby, A'niah Graves, Diamonique Reynolds, Jimaria Jackson and McKinna Robinson, ages 12 to 14, were on their way to Annie Camp Junior High in Jonesboro for their basketball game when they crossed a bridge and saw a man with cables, according to Vicki Montgomery, the head coach of the girl's basketball team.

As they walked by, the man told them, "Y'all have a nice life," Montgomery told ABC News in a telephone interview.

"They turned around and he was placing rope and cable over his neck," Montgomery said.

The girls immediately called 911 and began talking to the man until help arrived.

"They got really scared," Montgomery said. "They told him not to do that."

Jonesboro police confirmed to ABC News that it was students who alerted officials to the man.

"When we see something, we need to say something if it is out of the ordinary," police spokeswoman Sally Smith told ABC News.

Police said they could not say the status of the man at this time, but he was uninjured when they arrived and taken to a hospital.

Montgomery said the girls hadn't told her about the incident, which occurred on Dec. 5, after it happened. It was another coach who came up to Montgomery the next day and said, "your girls saved some guy's life last night."

"They didn't do it for publicity," she said. "They did it because they genuinely cared about a person they didn't know."

She said the ordeal was an experience that has greatly affected them.

"Some of them struggle in life, as well. I think it opened their eyes to things that, at that age, most adults don't even see," Montgomery said.