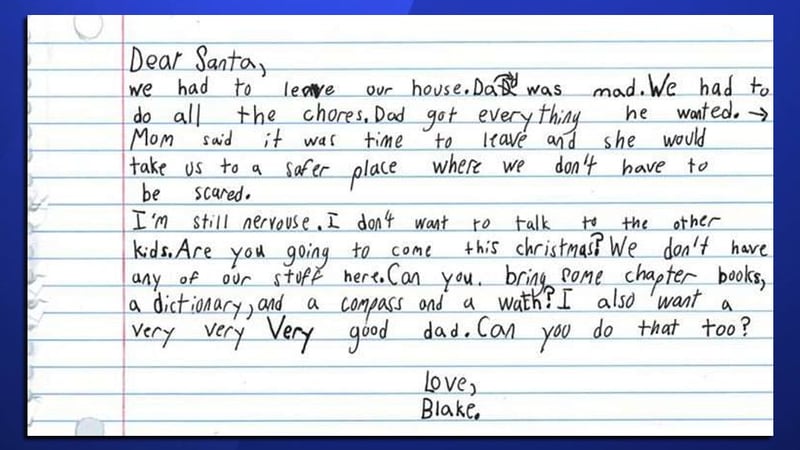 A 7-year-old Texas boy temporarily living in a domestic violence shelter with his mom wrote a letter to Santa, the shelter shared, with a heartfelt plea for presents and something money can't buy.

The boy asked Santa for chapter books, a dictionary, a compass and a watch -- but perhaps the biggest ask from the man in red was for a "very very very good dad."

His mom found a handwritten letter in his backpack a few weeks ago and she shared it with SafeHaven of Tarrant County staff, a shelter for domestic violence victims in Fort Worth, Texas, its president and CEO Kathryn Jacob told CNN.

SafeHaven shared the letter on social media Wednesday morning, noting they changed the boy's name to Blake for his family's safety.

We had to leave our house. Dad was mad. We had to do all the chores. Dad got everything he wanted. Mom said it was time to leave and she would take us to a safer place where we don't have to be scared.

I'm still nervous. I don't want to talk to the other kids. Are you going to come this Christmas? We don't have any of our stuff here. Can you bring some chapter books, a dictionary, and a compass and a watch? I also want a very very very good dad. Can you do that too?

"Blake's story is like every story we see," Jacob said. "The problem is so pervasive."

An average of nearly 20 people per minute are physically abused by an intimate partner in the United States, according to the National Coalition Against Domestic Violence. In a year's time, that amounts to 10 million women and men.

While Jacob said she's grateful for the attention Blake's letter has garnered, she wants the light to shine on the prevalence of intimate domestic partner violence more often.

An average SafeHaven client is a mom of three kids, according to Jacob. Around the holidays, when children are out of school, the shelter typically sees an uptick of people in need of their services.

"I think adult victims of domestic violence are thoughtful and strategic -- I know they do the safest thing for themselves and their children," Jacob said. "We may not understand that completely, but I think that's why they typically don't want to interrupt their child's academic life, so they do that when there's a break from school."

As of Wednesday evening, the shelter is housing 74 children and 45 women. At the shelter's maximum capacity, they can house 164 people. Jacob said every family is unique with their needs as well as the length of their stay. On average, she said the families stay anywhere from 8-10 weeks before they're given a safe discharge plan.

Dozens of people on Facebook were touched by Blake's letter and asked in the comments if they could buy some of the things on his wish list or donate money. Several people even shared personal stories of a a time where they had experienced similar circumstances themselves.

"The people who have said that they've experienced this ... that has been stunning to me," Jacob said. "And I'm in this world. [It's] so many people."