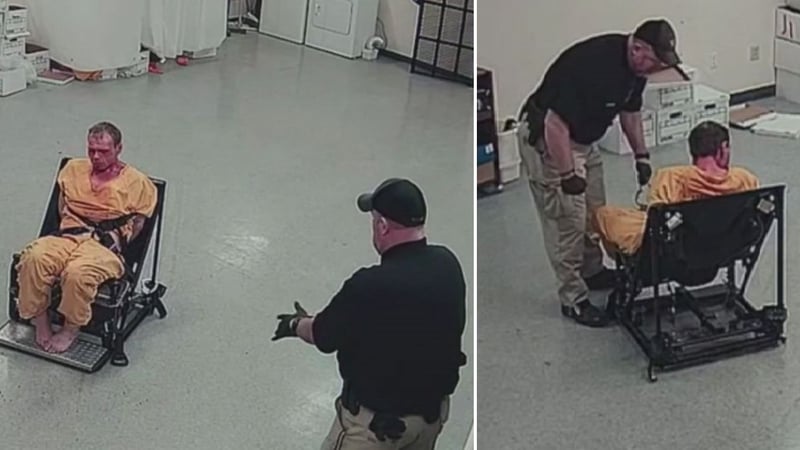 A former Ohio deputy sheriff's behavior is now the target of criminal investigators after he was allegedly seen on surveillance video punching a restrained prisoner 11 times in the face until his own hand was injured.

Jeremy Mooney resigned from his position with the Pike County Sheriff's Office last month after an internal investigation launched for his alleged use of excessive force on Thomas Friend, according to a press release issued by Sheriff James E. Nelson on Monday.

Friend was under arrest on Nov. 18, 2019 for a number of misdemeanor charges and placed in a restraint chair by deputies on duty because of his "noncompliance and disruptive behavior," Nelson said in the release.

During the video surveillance from inside the holding area and outside of the Waverly, Ohio, facility, Mooney is allegedly seen repeatedly punching Friend who is also handcuffed.

At some point during the alleged assault that moved to the parking lot, Mooney's supervisor Sgt. Tim Stansberry was allegedly nearby when Mooney pepper sprayed Friend before pushing him onto his back in the chair, rendering him unable to move for several minutes, said Pike County Prosecutor Rob Junk who described the video to ABC News on Tuesday as "disturbing."

Friend and Mooney were taken to a local hospital for treatment and were released, said Nelson.

Nelson said he was notified by other officers, who responded to the hospital, and an investigation was launched. Mooney and Stansberry were placed on administrative leave pending the completion of the investigation, which recommended firing Mooney.

Efforts by ABC News to reach Mooney for comment were not successful.

The sheriff's internal investigation findings were turned over to Junk for consideration of criminal charges, Nelson said.

"The most important thing is that he is criminally prosecuted," Junk told ABC News.

Junk said he called the local FBI offices and the U.S. Attorney's office to take a look at the video in order for federal charges to be considered. "This will be 100% investigated."