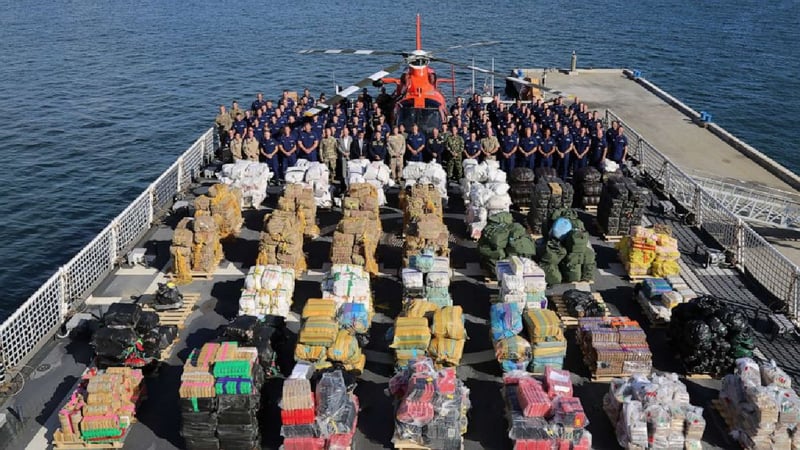 The U.S. Coast Guard has seized over 18,000 pounds of cocaine worth an estimated $312 million in a series of drug busts in the Eastern Pacific Ocean.

The operation, part of joint efforts involving five separate Coast Guard cutter crews, concluded with one vessel, the Bertholf, off-loading the entire amount seized at the marine terminal in San Diego on Wednesday.

Each crew was responsible for locating thousands of pounds of drugs between mid-October and early December, the U.S. Coast Guard said in a news release.

The @uscg Cutter Bertholf crew to offload +18,000#s of cocaine in San Diego today worth ~$312M! The cocaine was seized in intl. waters in the E. Pacific Ocean; the result of seven separate interdictions and disruptions by five cutters off the coasts of Mexico, C. and S. America pic.twitter.com/jg16B610QJ

The @uscg Cutter Bertholf crew to offload +18,000#s of cocaine in San Diego today worth ~$312M! The cocaine was seized in intl. waters in the E. Pacific Ocean; the result of seven separate interdictions and disruptions by five cutters off the coasts of Mexico, C. and S. America

These small vessels are designed to smuggle large amounts of contraband while evading law enforcement due to their camouflage and low profile, officials said.

In total, more than 3,100 pounds of cocaine were seized from the vessel on Nov. 4, according to a U.S. Department of Defense release.

Numerous agencies from the Department of Defense and Homeland Security participated in the drug busts, including members of the Navy, Immigration and Customs Enforcement, the FBI and the DEA.

"Disrupting the maritime networks responsible for moving vast quantities of drugs on the high seas is one important way that DEA helps stop the flow of cocaine and other dangerous drugs to the United States," said DEA acting Administrator Uttam Dhillon. "The staggering amount of illegal drugs offloaded today is a testament to our strong interagency partnerships – in the U.S. and abroad – and the success that can be achieved when working together to stop this threat to our country."

This is just the latest in a series of large drug busts by the Coast Guard.

Approximately 28,000 pounds of cocaine and 11,000 pounds of marijuana, worth an estimated $377 million, were seized in October during numerous operations in Port Everglades, Florida.

The contraband was interdicted in 18 separate operations of suspected drug smuggling vessels in international waters of the Caribbean Basin and Eastern Pacific Ocean off the coasts of Mexico, Central and South America, officials said.

In September, a submarine located in the Pacific Ocean was found with over 12,000 pounds of cocaine onboard, officials said. The drugs had a value of more than $165 million.

Two other Coast Guard vessels, the Tahoma and the Midgett, were responsible for seizing over 9,000 pounds of cocaine earlier that month.