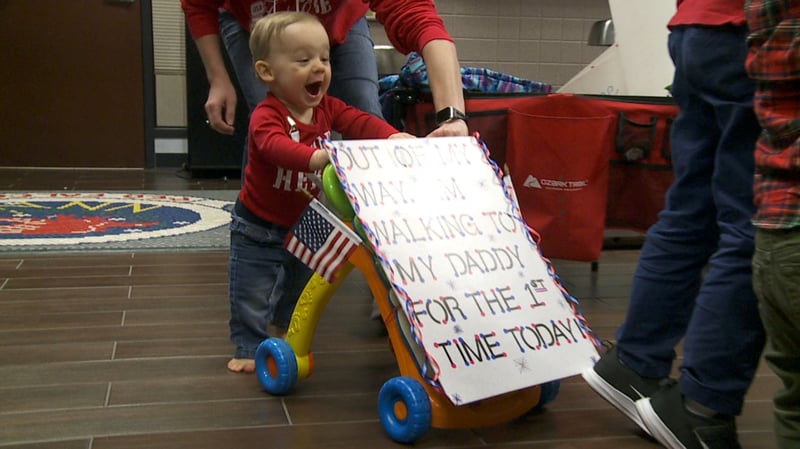 Sandy White and her family spent Tuesday in the “Heritage Room”, home of the 350th Air Refueling Squadron at McConnell Air Force Base. It’s a room that four and a half months ago meant goodbye.

“The goodbyes are always hard. Watching the kids be sad that he’s leaving, especially here at the end, the anticipation of him coming home but not here yet has definitely been a lot harder for them,” said Sandy White, wife of Squadron Commander Kevin White.

This time, being in the room meant something special for White and her 5 kids... Anxiously awaiting the return of their Dad.  She said it’s a feeling that doesn’t seem real until it actually happens.

“When they come home, I feel like a lot of times until they’re here and they see us, then it hits them that they’re actually home,” said White.

After many delays and a long wait, the kids finally spot something about 3,000 feet above them.    After landing, peeking their heads out the window for a moment nearly 5 months in the making - seeing the faces of their families.

It’s a gift that can’t be bought, and just in time for Christmas.

White says that even though they got lucky this time, other military families still need support, especially this time of year.

“As excited as we all are that they’re home, everybody who just went out to replace them now is getting ready for Christmas without their families, and having the opposite feelings of what we are,” said White.

After unloading the cargo, the White’s headed home. They said the first thing on their to-do list is drive around with Dad and see all the Christmas lights.