111-year-old woman, the granddaughter of a slave, dies in Georgia 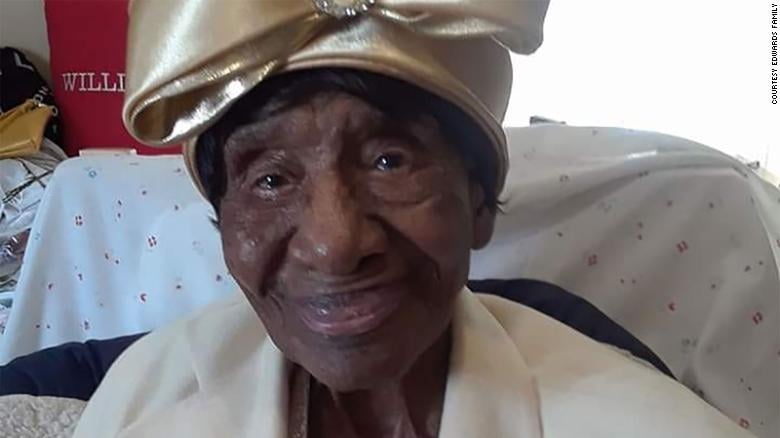 Willie Mae Hardy was born the grandchild of a slave in 1908, when Theodore Roosevelt was president.

She lived through two world wars, the Great Depression, Jim Crow and the civil rights era. She endured to vote for a black president and even meet his history-making wife.

Willie Mae Hardy said her secret to longevity was "Trusting in the Good Lord."

Hardy died in her sleep Wednesday at 111, one of the oldest people in the country. She enjoyed a "wonderful life," her caretaker and granddaughter, Veronica Edwards told CNN from their metro Atlanta home.

"She didn't want for anything," Edwards said. "She was involved in the community until her health declined. She was caring and had a loving heart."

Born on an old plantation

Hardy was born on March 11, 1908, on a former slave plantation in Junction City, Georgia. She remembered the stories her grandmother Nancy told her about life as a slave -- working from sun up to sun down, picking cotton, and having no freedom.

Edwards said living in the Jim Crow rural south was not easy for her grandmother. After third grade, Hardy left school and worked in the fields to help her family. She moved to Atlanta in the late 1930s with her soon-to-be husband and daughter, working as a maid for wealthy families.

This year she had the opportunity to meet former first lady Michelle Obama, who visited Atlanta on her book tour.

"She was overwhelmed," Edwards said of Hardy's reaction. "She was happy. She asked, 'She wants to meet me?'"

Back in 2008, Hardy had been elated to vote for then-Sen. Barack Obama as he became the first African-American president.

"She never thought she would live to see that," Edwards told CNN. "It was a thrill and joy for her."

Edwards said Hardy instilled the importance of voting in all her relatives and participated in every election since she was allowed the right to vote, even local races.