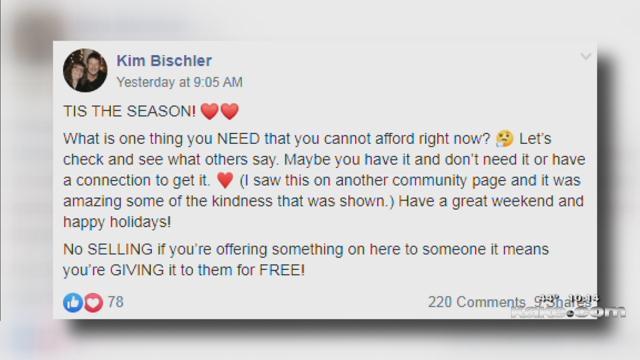 The post asked "What do you need that you can't afford?"

Tammie Terry says it's been a tough year for her family. "We had our heat go out, and hours at work were a little limited, said Terry.

Even in hard times, she looks for ways to serve.

"We just enjoy the feeling when you give, it's something you can't describe",said Terry, "I was scrolling on my Facebook, and I saw a post that inspired me.

"I saw the post, and I was like I'm just going to throw my two beds on there."

One of those beds is going to bring rest to Mercedes Walker. "I have come to find that if you do ask, people will help," said Walker.

Moved by the generosity of others in her small town community, walker says the act of giving is contagious For her, its come full circle.

"I gave a box of clothes to a woman and she gave me wipes in return."

Terry hopes her family's desire to serve will inspire others to do the same and teach her kids a lesson they won't forget. The lesson that something small can make a big difference for someone else.

"Even if it's a used bed, It's just a reward and that sensation you get in your heart from helping others."