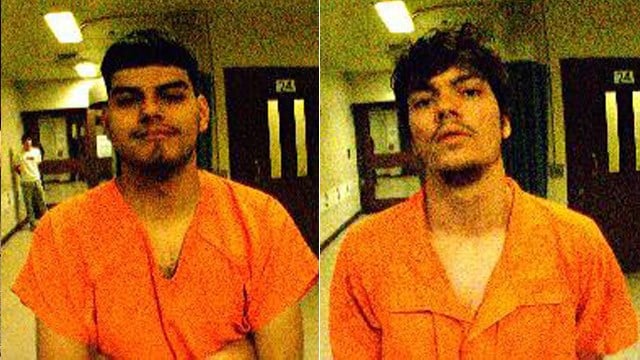 Officers responded at around 7:50 p.m. Tuesday to an armed robbery at the Dollar General in the 2900 block of North Broadway. Employees told police that three suspects in masks entered the store and one of the suspects robbed them at gunpoint. The suspects fled with an undisclosed amount of cash.

Officer Charley Davidson said a witness provided a vehicle description and a tag number, and officers located the vehicle in the 1400 block of North Mt. Carmel. As officers contacted the driver, identified as Arango, he got out of his vehicle and ran. He was taken into custody after a brief foot pursuit.

At around the same time, Officer Davidson said the Dollar General in the 2900 block of West 13th Street was being robbed. When officers responded at around 8:50 p.m., employees told them a suspect with a gun robbed them while another suspect kept watch outside. Again, the suspects took cash and fled.

Officers set up a perimeter in the area, and they located Maddox and the 16-year-old with the help of a K-9. Cash and a gun were recovered.