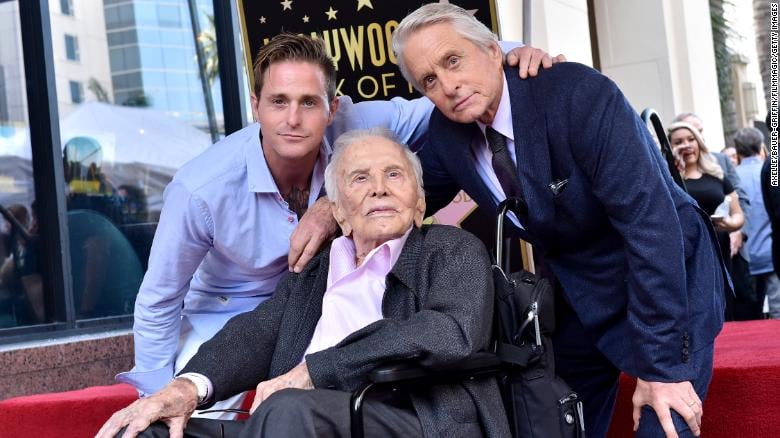 The family of acting legend Kirk Douglas paying their respects to the screen icon as he celebrates his 103rd birthday.

Catherine Zeta Jones took to Instagram to post a shot of her father-in-law sitting on her knee, captioning: “This guy on my knee, is 103!!!!! Happy Birthday Pappy!!! I love you with all my heart.”

Cameron Douglas, Kirk's grandson and son of Michael Douglas, also gave a shout out to his grandfather on social media.

“Happy Birthday Pappy...you are a gift to the world; a guiding light and source of inspiration to me. I Love you. #103 to #infinity,” he wrote.

Douglas has been a Hollywood mainstay for decades and is perhaps best known for starring in the 1960 drama “Spartacus.”

Here's a look at the life of Kirk Douglas.

His parents changed their name from Danielovitch to Demsky after immigrating to the United States.

Appeared in two movies with his son Michael, "Cast a Giant Shadow" and "It Runs in the Family," which also starred grandson Cameron and ex-wife Diana.

Through the Anne and Kirk Douglas Playground Award, has provided funding toward the building and refurbishing of more than 480 school playgrounds for the children of Los Angeles.

1960 - First time as a producer for "Spartacus," in which he also stars. His insistence that blacklisted writer Dalton Trumbo's name appear in the credits is the beginning of the end of the Hollywood blacklist.

1964 - Founds The Douglas Foundation, a philanthropic organization run by Douglas and his wife Anne.

1973 - First time directing for "Scalawag," in which he also stars.

1981 - Receives the Presidential Medal of Freedom for his role as a goodwill ambassador for the State Department.

1986 - Becomes a spokesperson against elder abuse after appearing in a television movie on the subject, "Amos."

February 1991 - Survives a helicopter accident, in which two people die.

1991 - Receives the Life Achievement Award from the American Film Institute.

1995 - Suffers a stroke that initially leaves him without the ability to speak.

1996 - Receives an honorary Academy Award for "fifty years as a creative and moral force in the motion picture community."

2001 - Receives the Producers Guild of America Milestone Award, its highest honor, in recognition of his contribution to entertainment history.

March 2009 - Performs his one-man show, "Before I Forget," at the Center Theatre Group/Kirk Douglas Theatre in California.

Yahoo, CNN and the Associated Press contributed to this report.