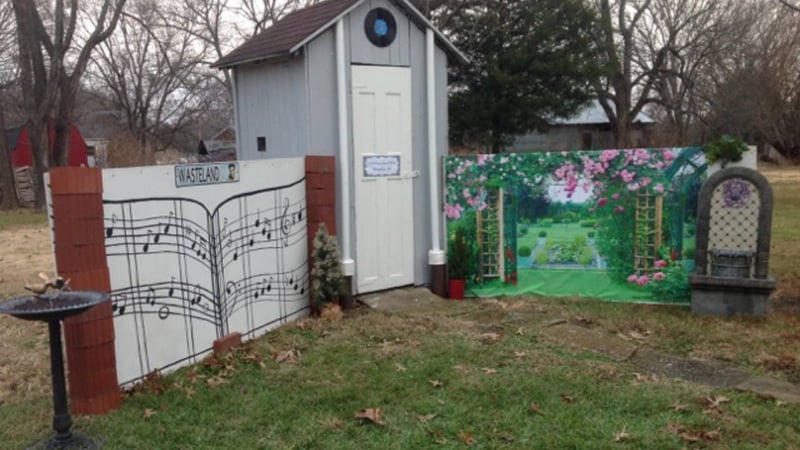 When most Kansans think about Elk Falls, they picture the beautiful waterfall that inspired the town's name. However, not too far from its historic truss, is another ...well, a site that conjures up another picture, although it is still water-related, at least, in a way.

Elk Falls is the home of a yearly outhouse competition, in which people can decorate their own potty. This year, there are 20 of them decorated with themes like “Bath and Potty Works” and “Filla Pee No” Palace, complete with a skeleton princess wearing a pink dress, sunglasses and flip flops sitting on her royal throne, according to WDAF.

“It’s a two-seater!” yells James Boyd of Missouri.  He and two friends howl with laughter.

That’s not the only princess caught in the act.

Snow White sits in another outhouse with her seven dwarfs outside, each bearing a new name, like Smelly and Poopy.

Even Winnie can’t Pooh in private!  The big stuffed bear sits on a toilet inside an outhouse called “Pooh Howse.”

A privy labeled “Hole In One” lets visitors hit a golf ball up a chute and into the stool.

“Got it!” shrieks one woman, who made it on the first try.

It’s a crapshoot, so to speak, that started back in 1996 as a joke about how to improve the annual town festival.

“But we thought, ‘What the heck?’” said organizer, Steve Fry. “We’ve never heard of that before so we tried it. People really enjoy it, and we found out there’s a lot of outhouse enthusiasts around.”

So many, in fact, locals compete for bragging rights, and YOU, the visitor, get to pick the winner.

“You buy a button for one dollar, and that gives you voting privileges,” said a volunteer working at the aptly-named Outhouse Headquarters.

But can you, just a lowly visitor, judge the structural integrity and relative of a building designed for an obvious job, without, ahem, trying them out?

Another woman said she comes for the entertainment.

“Number one or number two!”

No highbrow humor here—this is the Super Bowl of puns, or “Super Bowel,” as the sign reads on two outhouses decorated with a football motif.  A player sitting on one stool plays for the Green Bay Crappers.

It’s only fitting WHERE you cast that ballot since the race is bound to get dirty! A voting booth outhouse has a slot in the toilet lid where judges drop their papers.

“I hope I get a ‘I voted’ sticker!” laughs Thurman.

This year's winner is entitled "Smellvis," a skeletal Elvis wearing a rhinestone-studded cape, bad wig and sunglasses. His outhouse is not called Graceland, but, rather, Wasteland!

Despite all the fun, there are still some party poopers.

“Some people still aren’t crazy about the idea of Elk Falls being the outhouse capital,” said Fry, with a smile.

Still, he says the yearly contest in November draws about 1,500 visitors to the small town, making it the go-to place when you HAVE to go!