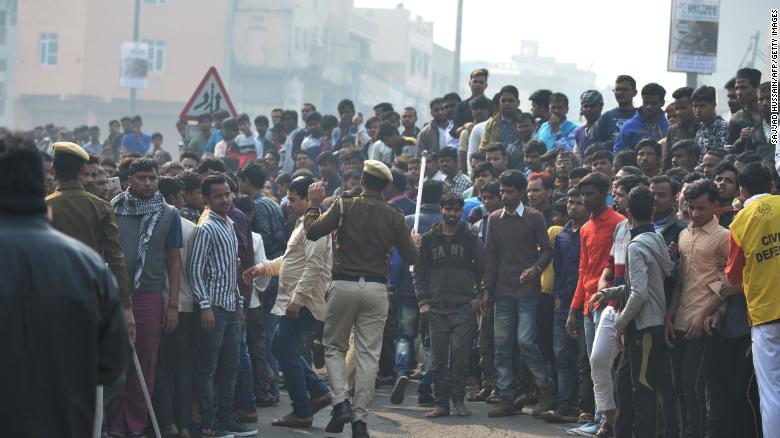 At least 43 people have died in a major blaze that broke out in a factory in India's capital New Delhi, police and fire department officials told CNN.

The fire swept through the five-story building in the early hours of Sunday, as laborers and factory workers were asleep inside. Some died due to asphyxiation, officials said.

"The problem was the smoke -- all the windows and doors were shut and there was dense smoke inside," said Sunil Choudhary, deputy chief fire officer.

"No one could get out. There was an iron door and it was locked and people were brought out only after we broke the door open. It had become a toxic chamber."

An eyewitness said some workers had tried to escape from a terrace, but it was locked.

"There are no proper ways to climb or get down, there is no fire safety, there is nothing," Mohammad Samar said, adding that this was not the first blaze at the site, which was a plastic factory that manufactured toys.

Samar said a number of small, unauthorized factories had been renting out space in the building, and that the complete lack of safety provisions was widely known.

Another eyewitness, who helped with rescue efforts, said he had seen boys trying to escape from the factory's roof, while others desperately crowded near sealed windows.

"I saw that the boys, who were standing there on the roof, they started screaming ... calling out to me ... saying 'Mullah sir please save me,'" Mohammad Manzur said.

Avtar Singh, an assistant division officer for the fire department, said that more than 60 people had been evacuated from the building and the injured were transported to three local hospitals.

Fire officials said they had struggled to reach the factory in the city's old quarter, a tangle of narrow, busy lanes lined with manufacturing units.

Thirty fire engines were stationed near the site, but only one managed to get to the building and extinguish the blaze through a relay system, Singh said.

The fire, which officials say was sparked by an electrical fault, took almost three hours to put out.

The fire in Delhi’s Anaj Mandi on Rani Jhansi Road is extremely horrific. My thoughts are with those who lost their loved ones. Wishing the injured a quick recovery. Authorities are providing all possible assistance at the site of the tragedy.

5,620 people are talking about this

"My thoughts are with those who lost their loved ones," Modi said. "Wishing the injured a quick recovery. Authorities are providing all possible assistance at the site of the tragedy."