'We've gone this far': Farmers stick with Trump over trade 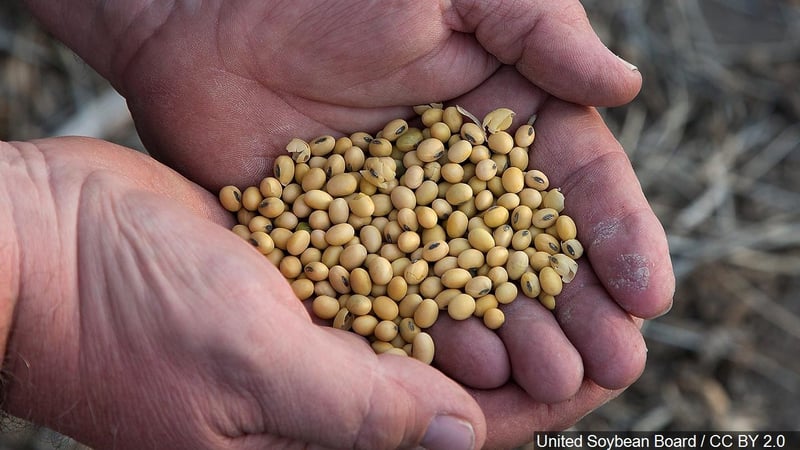 China's tariffs immediately wiped out what was once their biggest export market, worth $12 billion in 2017. That was more than a year ago. Soybeans have since piled up in bins, sending the amount in storage up 108% in 12 months. The price per bushel has fallen to a 10-year low.

The situation looks bleak, and tariffs have hit other crops like corn and wheat, too. Many farmers have expressed frustration, and some have even said they no longer support the President. But farmers, a politically important group for Trump, are staying afloat -- largely thanks to Trump's bailout -- and that's keeping some on board with Trump's trade war.

"At this point, we've gone this far, we want to make sure we get a good deal," said Iowa farmer Grant Kimberley, who also serves as director of market development at the Iowa Soybean Association.

Like many others, Kimberley was able to sell most of his soybeans last year -- but for a lower price. He just finished harvesting his soybeans this year, selling some and putting the rest in storage, waiting to see if prices go up. But with bills to pay, farmers can't hold onto the crop forever.

Trump has given about $28 billion -- about double the cost of the 2009 auto bailout -- to farmers hurt by the Chinese tariffs. The payments aren't meant to make up for their total losses, but it's helping bridge the gap.

"We'd rather have trade than aid. But it's been a godsend to have that, otherwise things would look pretty ugly," said Kimberley.

A recent survey found that farmer sentiment is higher than it has been since 2016 and the US Department of Agriculture projected that farm income will be up 10% this year, to the highest level since 2014. But without government payments, which are expected to be up 64% in 2019, farm income would have actually shrunk.

The agricultural sector has been struggling for years. In 2016 farm income, without the subsidies, fell to just half of what it was three years before.

Trump's aid payments are a lifeline, but they're not saving everyone. Farm bankruptcies are up 24% compared to the year before, according to the American Farm Bureau.

"The latest round of trade aid to farmers provides critical support," said Farm Bureau President Zippy Duvall in a statement this week, adding that a "further delay in reaching an agreement would make it hard for struggling farmers to hold on in the face of rising bankruptcy rates."

Still, some farmers see the bailout as evidence that the President still has their backs.

"I think it's important that the payments do highlight the fact that the administration understands the pressure they're putting on farmers and the rural economy," said Illinois farmer Evan Hultine. He decided to take soybeans out of rotation this year to try to avoid some of the trade uncertainty.

"We understand that maybe China needs to be brought to task for improper trade tactics and unfair practices, but we're looking at a year-and-half now," he added.

There's been numerous contradictory signals from both the United States and China about how close they are to reaching a deal. Trump suggested this week that he might wait until after the 2020 election.

Pennsylvania farmer Bill Boyd said he supported Trump's trade war originally, when he thought it would be wrapped up in a few months. But now that it's dragged on, he thinks it was a "bad idea."

"I think he's backstabbing the main people who got him into office in all those Midwest states who help to vote him in," Boyd said, but added that it's likely he will vote for Trump again.

"Unless they (Democrats) come up with a better alternative, I am going to vote for him again," he said.

Will the Chinese market come back?

If a China deal was signed tomorrow, Kimberley doesn't expect things to go back to normal for at least a year. The Chinese have started buying more from South America and may continue to do so. But there's hope that at least some of the orders will come back since China buys 60% of the world's traded soybeans.

Some farmers are less optimistic than others that a significant part of the Chinese market will return.

"You don't trade with partners that you don't trust, you just don't," said Marcy Svenningsen, who grows soybeans, corn and wheat in North Dakota.

The low price for soybeans have been painful for Svenningsen, but bad weather has brought on other challenges, resulting in "one of the worst years" she's seen. An early snowstorm destroyed some of her soybean crop. A pile of corn is sitting in her backyard because the crop is too wet to sell. And she also can't sell her wheat, which got infected with a disease because of the wet conditions.

But she received payouts from her government crop insurance plan for the damaged wheat, as well as aid from the trade mitigation package. She also has a job off the farm, which supplements her family's income. Still, she's holding off on making any equipment purchases, even though some things need to be replaced and expects to lose money this year.

"You know farmers, we just keep plowing ahead every single day. You just do it," she said.