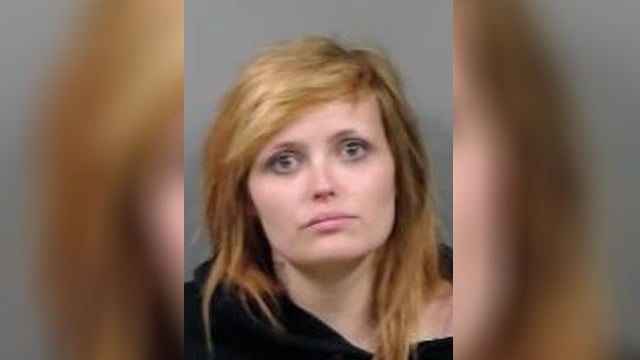 A woman accused of crashing a car into a home in Wichita is now behind bars, and two families are picking up the pieces.

"My daughter was just screaming, 'Mommy,'" Caren Larkin said. She lives nextdoor to the house struck by a car Thursday night. "We were both scared."

Larkin said she remembers every moment after the driver of a stolen car struck her neighbor's house and her own car.

"I could hear screeching of tires, then hear the crunching of metal, and all the lights went out, and the whole house shook," Larkin said.

Police spotted a stolen Honda Fit around 9:30 Thursday night in the 1200 block of S Bluffview. Officers tried to stop it near Fountain and Morris, but the car sped off. It crashed less than a mile away on Gilbert Street, causing significant damage to a garage and two parked cars.

Police arrested the driver, 24-year-old Heaven Westendorff. She faces charges including theft, reckless driving, and evading and eluding police officers. Officers also booked a 17-year-old passenger who ran from the crash and had outstanding warrants. Two other adults were also taken into custody, and it's not yet clear if they will face charges.

Larkin said she was sitting on her couch, and she thinks she would probably have been hurt if the cars were not in the driveway.

"My neighbor's wife's Jeep was in her driveway," Larkin said. "They hit it so hard, it pushed it into my driveway, which pushed my car into the house."

The driver suspected of causing all the damage is behind bars, but Larkin said that doesn't solve everything.

"That's great, but it's not helping me right now," Larkin said. "I'm out a lot. I'm barely making it." Larkin said she's stuck with repair bills she can't afford.

Larkin said she's trying to stay optimistic. If you would like to help in some way, you can contact KAKE News at news@kake.com or (316)946-1331 to get in touch with Larkin.

Wichita police have arrested a 24-year-old woman who allegedly crashed into a vehicle and a home during a pursuit.

Police spokesperson Charley Davidson said at around 9:30 p.m. Thursday, two officers spotted a red Honda Fit in the 1200 block of South Bluffview that had been reported stolen. When the attempted the stop the car, the driver fled.

A short chase ended when the car crashed into a white Jeep in a driveway and the garage of a home in the 3100 block of East Gilbert. Westendorff was arrested without further incident.

Davidson said three others were in the car. A 17-year-old boy ran from the car but was located and taken to the hospital with minor injuries. A 20-year-old man also had minor injuries, and a 19-year-old woman was not hurt. They have not been arrested.

The 17-year-old was listed as an active runaway.