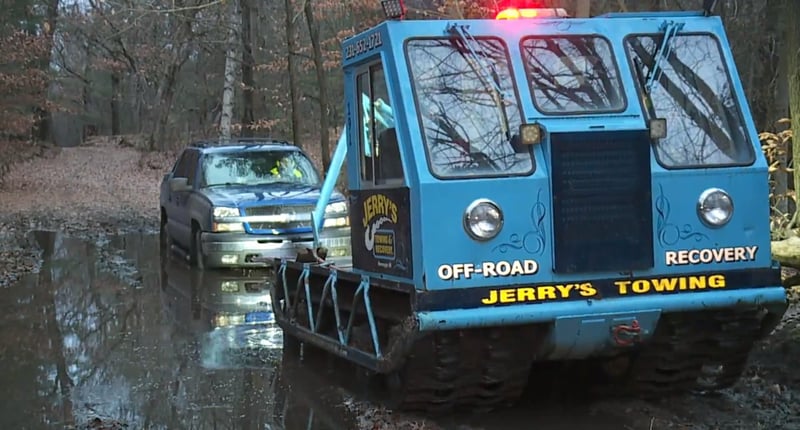 After getting lost and stuck on the back roads in Newaygo County, the 95-year-old Diamond Lake resident had to leave his car and be carried to dry ground by two generous workers.

The situation arose when the man went off-road on his way back home from a family Thanksgiving dinner. He lost his wife a few years back around this time of the year and is also a hospice patient, so he just wanted to have a little fun in the muddy mess of the trails.

About two-mile into the expedition, he became stuck in feet of muck. Having no numbers on his phone, he could only call 911 for help. 911 dispatch relayed his cry for help to Jerry's Towing, where they immediately sent drivers out.

"One of the two wrecker drivers told me he didn't know if they were going to be able to get to him being that they made it this far and couldn't see how many holes were still there." said Emily Paulsen, with Jerry's Towing & Recovery. "My first thought with him being an older gentleman was that we have to get him out of there before it got freezing cold."

Unable to walk on his own, the drivers parked their cars. With the man in their arms, they walked back and forth through several muddy holes to make sure he was safe.

On Black Friday, the crew took some of their own time to go back to the site and get the car out. Emily said there have been situations on the trails where people's cars have been vandalized or impounded so they knew they had to get it out sooner rather than later.

With a crew of five, they brought the best equipment they had to pull the vehicle out. They knew the man didn't have adequate insurance to pay for the tow, so the company ended up doing it for free.

Emily and all the workers say as we continue through the holiday season, remember to go out of your way for someone in need.