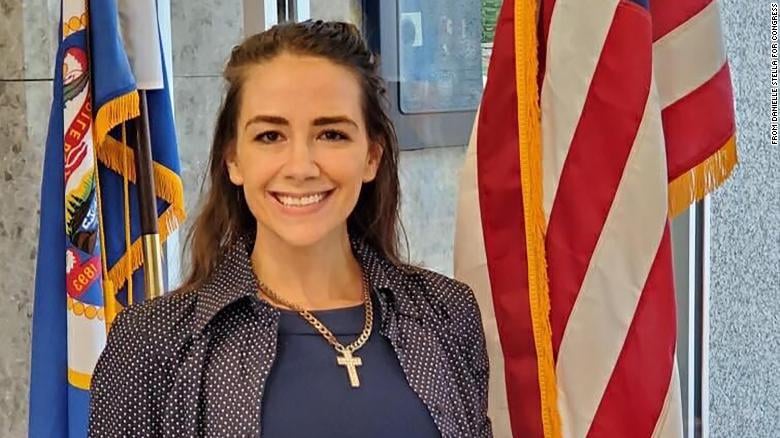 Danielle Stella says she was banned for a tweet in which she spread a baseless claim about Omar and said if the claim is true, Omar should be tried for treason and hanged, according to a post to her Facebook account. Two Twitter accounts of Stella's have been suspended, her campaign confirmed to CNN.

Omar has been a frequent target of smears and attacks by President Donald Trump and his supporters. In April, Omar said she experienced an increase in death threats after Trump tweeted about a speech she had given the month before.

"This just shows how far the Republican Party has fallen under Trump. Their campaign strategy is just threats, disinformation and smears against their opponents and the people will continue to reject it," Omar said in a statement.

The Minnesota freshman was elected last year and is the first Somali-American member of Congress, and she and Democratic Rep. Rashida Tlaib of Michigan are the first two Muslim women ever elected to Congress. Omar has been at the center of numerous controversies since being sworn into Congress, including making comments criticizing US support for Israel that were seen as invoking anti-Semitic tropes and stereotypes.

In a statement to CNN, Stella strongly criticized Twitter for the suspension and its policies.

Twitter has come under fire from critics who say tweets from politicians, including Trump, often violate its rules against bullying, dehumanization and threatening harm but are not taken down. Twitter announced in June that they would not always remove tweets from world leaders, which break its rules when Twitter decides they are in the "public interest." The company said then that they plan to place disclaimers on tweets that they decide to leave up.

The company provided a list of criteria that would inform this decision, including "Whether preserving a Tweet will allow others to hold the government official, candidate for public office, or appointee accountable for their statements."

Stella, who is not the only Republican looking to unseat Omar, describes herself as a special education needs professional. She writes on her campaign website that "as a result of the lack of honorable representation for Minnesota's 5th congressional district, I believe it is my duty and privilege to stand up and speak for the forgotten American citizens in the District and throughout the state."

Omar came to the US more than two decades ago as a refugee and became an American citizen in 2000 at the age of 17, according to The New York Times. She ran with the support of the Justice Democrats, the same progressive group that helped bring New York Rep. Alexandria Ocasio-Cortez into politics, and is a proponent of Medicare for All, abolishing ICE, tuition-free college and raising the minimum wage to $15 an hour.