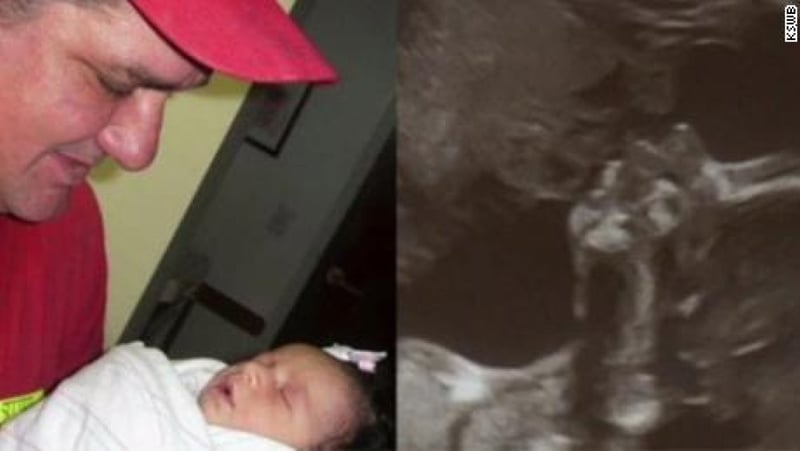 A San Diego woman says her ultrasound revealed what appears to be the image of her late father kissing her daughter.

"It’s nice to look at and its a great story to tell," said Shantel Carrillo as she glanced down at the ultrasound image.

At five months pregnant, Carrillo was just excited to finally see a profile shot of her baby girl on the way. After posting the photo on social media, she says people quickly chimed in saying it looked like "an angel" was kissing her daughter.

Carrillo quickly realized it wasn't just anyone gracing the photo, she believes it was her father. She grabbed an older photo of her father with her first daughter. Side by side, she says the resemblance is uncanny.

"It has his nose, his little chubby cheeks, his little double chin, and my dad wore a hat like all the time. It looks like the bill of his hat and his lips are just touching hers so perfectly," said Carrillo.

Carrillo’s dad Chuck passed away suddenly in 2016. She was his only daughter and her daughter was his only granddaughter, until now.

“I think my dad would just be over the moon about it, so I feel like he’s including himself in this someway, somehow."

He may not be here in person for this pregnancy, but Carrillo now has something tangible to feel like her father is never too far away.

Carrillo is due to have her baby girl in April, just a few days before her father’s birthday.