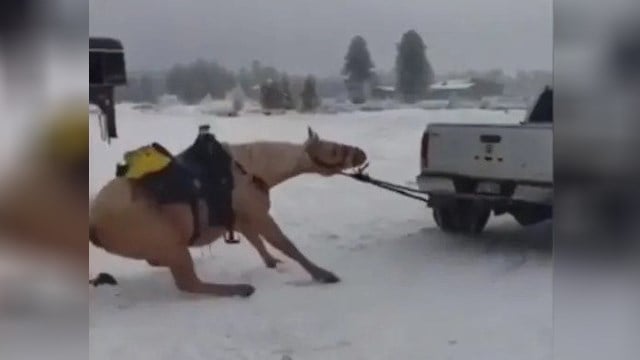 Authorities in Colorado have charged two people with animal cruelty after video showed a horse being dragged behind a pickup truck.

KMGH reports 59-year-old John Saldate and 33-year-old Amber Saldate are each charged with one count, which is a class one misdemeanor.

Officials said video of the incident near Grand Lake was shared extensively on social media. The horse was later seized by law enforcement and is safe.

The Grand County Sheriff’s Office began its investigation on Sunday,. Animal control checked on the horse on Monday and found no signs of trauma.

The ABC affiliate in Denver, cites a Sky-Hi News report that the video showed the horse being tied to a truck and pulled while the animal resisted.

The district attorney's office said they received several calls about the video.

The suspects are scheduled to appear in court in January.

Grand Lake is northwest of Denver.