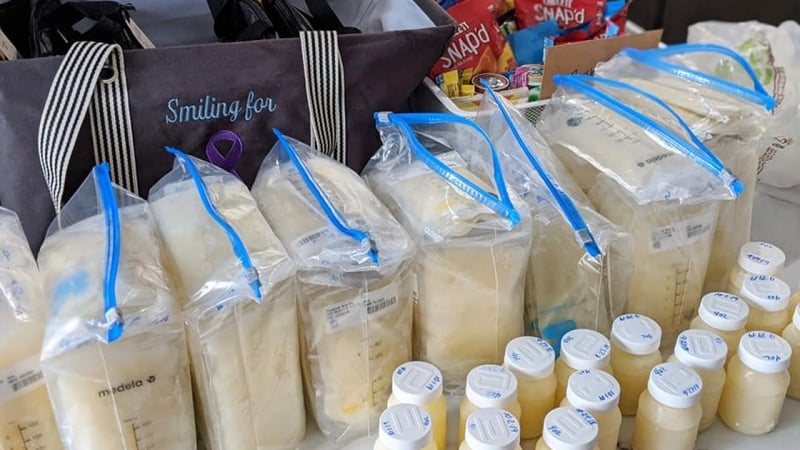 In a time of tremendous grief, one woman chose to help the babies of other moms to honor the one she lost. Sierra Strangfeld made the selfless decision to pump breast milk for donation, even though her baby was gone.

Strangfeld had oped to breastfeed her baby boy, Samuel. But a little more than halfway through her pregnancy, she found out her baby had Trisomy 18, a rare genetic condition that affects about 1 in 6,000 live births.

When it became clear Samuel was not going to survive much longer in utero, Strangfeld has an emergency c-section. He lived for three hours.

(More: My OB said there's no such thing as prenatal depression, but I had it)

"His hands were clenched, his feet were clubbed, he was small," she told "Good Morning America." "But he was so perfect. He fought so hard to be able to meet us. Our baby boy was put on this Earth for a reason."

Since Strangfeld's daughter was fed from donor milk supplied by her sister-in-law for a period of time, Strangfeld decided she wanted to help other moms in the same way. "I've always wanted to be able to help another mom in need. Samuel would have had a hefty NICU stay had he survived, so I know we would have had to use donated milk to a point. Now I can be the one helping others," she said.

(More: Why more moms are turning to 'black-market' baby formula)

Strangfeld donated 500 ounces of pumped breast milk. In a Facebook post, she wrote in part, "And today, his due date, I donated my milk to the NICU milk banks for the first and last time. Walking through the hallways of the hospital was just another step in healing. And I know, (because I felt him), that Samuel was there with me."

The Neillsville, Wisconsin, mom told "GMA" that "Although some days were terrible, and it would have been easier to just quit, Samuel's the reason I had milk to give. It was one thing physically connecting me to him here on Earth."

Strangfeld and her husband, Lee, hope to one day establish a foundation in their son's name. Right now, "Smiling for Samuel" has a T-shirt campaign to raise awareness of Trisomy 18 and there's a scholarship in his name.

"Pumping is not for the faint of heart. It's hard. Mentally and physically. And it's even harder when you don't actually have a baby," she wrote in her post. "I couldn't save Samuel's life, but maybe I could save another baby's life."