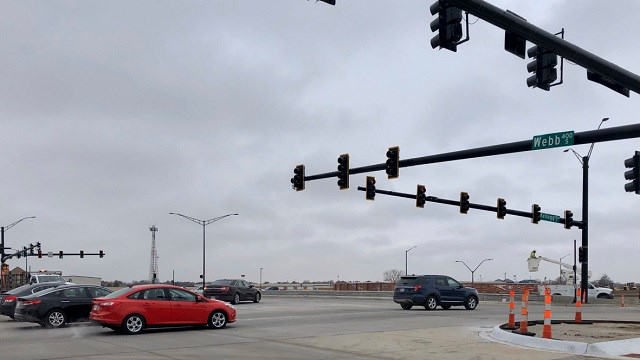 Left turns are now allowed at one of Wichita's busiest intersections, Kellogg and Webb Road.

On Friday, around 1:30 p.m., drivers were allowed to make left turns at that intersection.

"That's really been a struggle for a lot of folks, not just getting here, but to all the businesses in this area," said Carlee Wunderlich, general manager for Costco in Wichita. "Everybody is super excited about the left hand turns."

Left turns have been prohibited since late 2016.

"We're excited to be able to have it easier for people to get in and out of here and a lot safer, too," said Wunderlich.

During the ban of left turns, Wichita Police have issued over 1,300 tickets for illegal left turns.

Since 2016, #WPD issued over 1,300 tickets to drivers making illegal turns at Kellogg and Webb.@WichitaPolice pic.twitter.com/at4x8w4yDp

On Thursday, East Kellogg from Webb Road to K-96 opened for traffic.

Drivers are able to drive from West Wichita to 143rd Street before stopping at a traffic light. The speed limit remains at a reduced rate of 40 miles per hour.

The East Kellogg Improvement Project is expected to be completed in 2021. For updates on the project, click here.

Lily Wu
Check out these photos from across KAKEland snapped by our viewers, staff and local officials. Do you have pictures to share with us? Email them to news@kake.com.