Azubuike leads No. 4 Kansas to 75-63 win over E Tennessee St 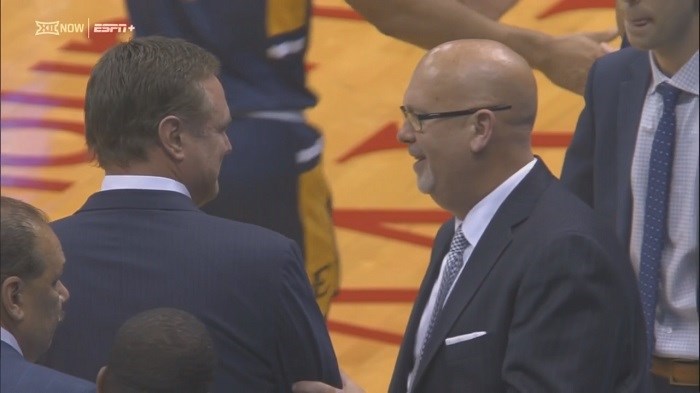 Azubuike's assortment of dunks, a couple of poised plays by Dotson and Garrett, and three misfires from beyond the arc by the Pirates' Patrick Good allowed the Jayhawks to ease away.

Bo Hodges had 22 points and Lucas N'Guessan scored 11 for the Pirates, who were off to their best start since the 1998-99 season. Daivien Williamson came off the bench to add 10.

The game looked like it would be The Dotson Show from the opening tip, when the sprightly guard coasted in for a layup. He proceeded to hit the Jayhawks' only 3 of the first half, threw an alley-oop to Silvio de Sousa for an easy dunk and knocked down a pair of free throws during a big early run.

The Jayhawks pushed lead to 31-13 before Dotson checked out for the first time.

They never looked quite as good again.

N'Guessan, who had played in Allen Fieldhouse with Oklahoma State, began a second-half charge for the Pirates that trimmed their deficit to 45-36 by the first media timeout.

The Pirates began to take advantage of the turnover problems that plagued Kansas in its season-opening loss to Duke, too. Ochai Agbaji was stripped twice in a span of about a minute, and Garrett and Tristan Enaruna had their pockets picked on back-to-back trips.

Seven times in a span of 12 possessions the Jayhawks turned the ball over.

East Tennessee State's confidence rose as shots started to fall. Tray Boyd III knocked down a pair of 3-pointers, then Good added two of his own, getting the Pirates within 61-56 with 5:52 left.

His one-handed jam over N'Guessan raised the crowd to its feet, and the 7-footer's two-handed dunk drew a foul and left the rim rattling as the teams retreated to their benches for a timeout.

It was still 61-56 when Garrett was fouled and made both free throws. Then, after Williamson turned the ball over for East Tennessee State, de Sousa threw down an alley-oop dunk in transition that helped to punctuate a win for the Jayhawks.

East Tennessee State showed why it's a good bet to reach the NCAA Tournament. The Pirates spotted the Jayhawks a big early lead, which is almost always a losing scenario in the Phog, yet relied on a senior-laden group that has won plenty of games to keep from getting blown out.

Kansas had chances to put the game away early. But the offense languished when Dotson went to the bench, and even the sure-handed guard had trouble with turnovers. Those are issues that will accompany the Jayhawks to the Maui Invitational, where they could face Michigan State down the road.

Kansas heads to the Maui Invitational in Lahaina, Hawaii.