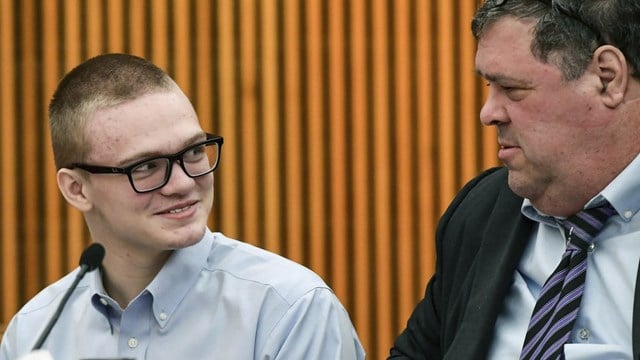 A school shooter who was 14 when he killed a first grader on a school playground in South Carolina after killing his father in their home was sentenced Thursday to life in prison without parole.

Jesse Osborne targeted Townville Elementary School because he had spent seven years there. Prosecutors, who pushed for the life sentence, said the teen was familiar with the classroom layout and knew there was no police officer on campus.

Osborne crashed his father’s pickup truck into the fence on Sept. 28, 2016 and fired on first graders celebrating a classmate’s birthday. Uneaten cupcakes with the Batman logo were still seen inside police tape hours later.

But Osborne’s lawyers noted he never tried to get inside the school, even though police took 12 minutes to arrive. Osborne had left a video chat open on his cellphone and witnesses said Osborne was pacing outside, crying and saying he was sorry.

Judge Lawton McIntosh handed down the life sentence in Anderson County immediately following several recommendations he mete out the maximum punishment possible. Those seeking life included Osborne’s former principal at Townville, the teacher whose class was on the playground that day, the family of 6-year-old Jacob Hall who was killed, Osborne’s own uncle and a child who escaped the horror. A U.S. Supreme Court decision bans the death penalty for juveniles.

“He killed my second best friend and showed up on my number one BFF’s birthday. I feel very, very, very mad. That is three reasons why he should spend life in prison,” the unnamed child wrote in a letter to the judge.

Osborne was sentenced hours after the latest deadly United States school shooting. Authorities said a student gunman opened fire at Saugus High School in Southern California, killing two students, wounding three others and shooting himself in the head. Investigators haven’t said why the teen attacked his classmates on his 16th birthday.

Osborne, now 17, was being tried as an adult and faced a minimum of 30 years after pleading guilty to two counts of murder and three counts of attempted murder. This week’s special hearing was required under a U.S. Supreme Court ruling that life sentences for juveniles can’t be mandatory and arbitrary.

McIntosh considered evidence including Osborn’s maturity and rehabilitation potential, his home life and the circumstances of the crime.

McIntosh said the murders were heinous and he worried about Osborne’s lack of remorse.

Osborne spoke for less than a minute Thursday, asking the judge for mercy.

“I would just like to say I wished this would have never happened. I don’t exactly know why I did this,” Osborne said. “I just ask you give me hope for the future and get me help because I do need help. I want help.”

Osborne’s lawyer asked for him to get a chance to live outside prison. They had psychiatrists testify that teens’ brains are still developing and it’s unfair to send him away for life when it’s not fully apparent who Osborne could become.

Their case attempted to show a teen who suffered abuse from his alcoholic father, was bullied at school and isolated himself in what he called a “dungeon” — his basement bedroom where he spent all his time after being expelled from middle school for bringing a hatchet on campus.

Osborne’s grandfather — who found the body of his 47-year-old son Jeffrey Osborne shot three times in the head at nearly the same time his inconsolable grandson called him from Townville Elementary — told the judge he would arrange a trust fund for Jesse Osborne and a family at his church to take care of him if he was released in the 2040s or beyond.

Townville Principal Denise Fredericks said none of the testimony sounded like the boy she knew and loved for seven years.

But she said justice would be a life sentence because those first graders, now fourth graders, carefully watch the fence when they are on the playground and a balloon popping last year ended a school dance in panic and tears. There were 31 in Jacob Hall’s class. She said just 13 remain at the school today.

Meghan Hollingsworth’s class was on the playground that day. Her daughter was in kindergarten at Townville Elementary. Two other students suffered minor injuries and Hollingsworth was wounded in the shoulder. She said she has mostly recovered physically but remains scarred emotionally.