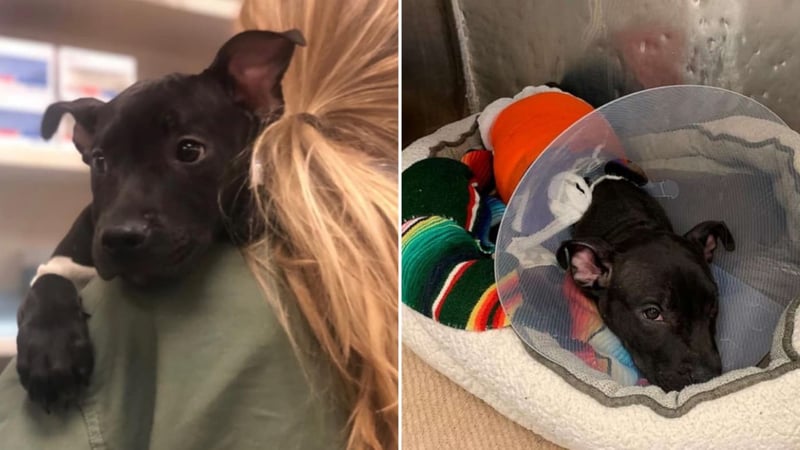 A 3-month-old pit bull puppy in New Jersey is recovering from horrific injuries he received after he was reportedly lit on fire with a blowtorch.

The puppy, named Tyler, was discovered by a Good Samaritan about a week ago after a witness saw Tyler and another dog lit on fire.

The Good Samaritan rescued the puppy and attempted to treat Tyler’s injuries for the past week before they made the decision to bring him in to the Oradell Animal Hospital on Sunday night due to just how severe his injuries were.

Ramapo-Bergen Animal Refuge in Oakland, New Jersey have since taken the baby canine under their care while he recovers and have begun sharing his story on social media – and the details aren’t pretty.

“We are only sharing images of Tyler with his wounds wrapped due to the disturbing nature of his injuries. Even worse, the skin is necrotic, meaning that he has been suffering with these wounds for some time without medical care,” said Ramapo-Bergen Animal Refuge in a post on Sunday night. “Despite horrific injuries, Tyler remains trusting towards his rescuers … Tyler should be playing carefree, snuggled up in someone's lap and soaking up the love all puppies deserve, not fighting for his life.”

The shelter has so far raised over $3,500 donated by more than 100 people as of Tuesday morning. The shelter also said they are working with authorities to find the other dog involved in the incident and to track down the people who committed these heinous crimes on the animals.

“Doctors had to cut away dead skin in order to treat his wounds. There is new skin growth in some areas, but in other areas doctors expect skin to die and the wounds to get worse before they get better, necessitating an extended hospitalization and treatment,” the post said. "Tyler has lost protein, which is common with burn victims. A plasma transfusion is being considered based on how he recovers. For now, he is on fluids to support his tiny body. We all share the sentiments of our executive director, Megan Brinster, ‘This one has disturbed me to my core.’”

The animal refuge said that the incident happened in an area that is known for dog fighting and that they have had to recue other dog fighting victims from the area previously.