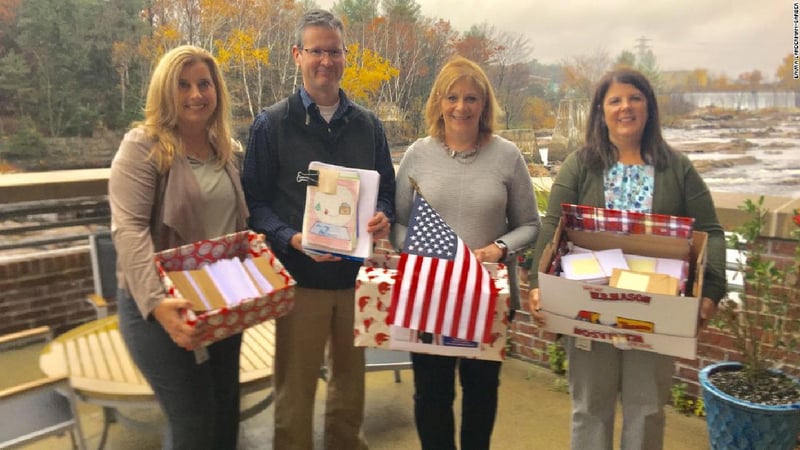 "I'm a grandmother," might as well be Laura Landerman-Garber's catch-phrase. It's something she repeats over and over as she tells the story of how she expanded a small family tradition into a full-blown nonprofit which will send 100,000 cards to US troops this holiday season.

But she's not just a grandma. She's a full-time clinical psychologist living in Hollis, New Hampshire, who -- in her spare time -- runs her nonprofit, Holiday Cards for Our Military Challenge, which she calls a "passion project."

This year, Holiday Cards for Our Military Challenge will send out over 100,000 cards to all five branches of the US military stationed all over the world, she told CNN.

Right now, all the cards are piling up in her basement and have formed an impenetrable wall in her garage, she says.

"The thought of someone being away at a time when in our culture, in American culture particularly, the holidays are all about gathering together... for me, I wanted to be able to reach out and just maybe give a little bit of a bridge so that person who is far away feels a little tiny bit closer to home," Landerman-Garber told CNN.

It started as a small family tradition

The project began on Thanksgiving Day 16 years ago when Landerman-Garber told her family that nobody got to eat Thanksgiving dinner until they had all written cards to military members. She called it the "ticket to turkey." With the threat of turkey on the line, of course, they all pitched in.

For 14 years, she and a few other families carried on the tradition.

Two years ago, a friend of Landerman-Garber's daughter was deployed in the Navy to the USS Theodore Roosevelt. Landerman-Garber pledged she would send cards to all the soldiers on what she then called a "boat."

She quickly learned that the USS Theodore Roosevelt is not a boat, but an aircraft carrier. To meet her goal, Landerman-Garber would have to gather over 5,000 cards.

With an enormous goal in sight, she began to call it a "challenge" and enlisted the help of churches, synagogues, Girl Scouts, Boy Scouts, and politicians, she told CNN.

To her surprise, the project far exceeded its goal, gathering almost 17,000 cards for the military personnel aboard the aircraft carrier. 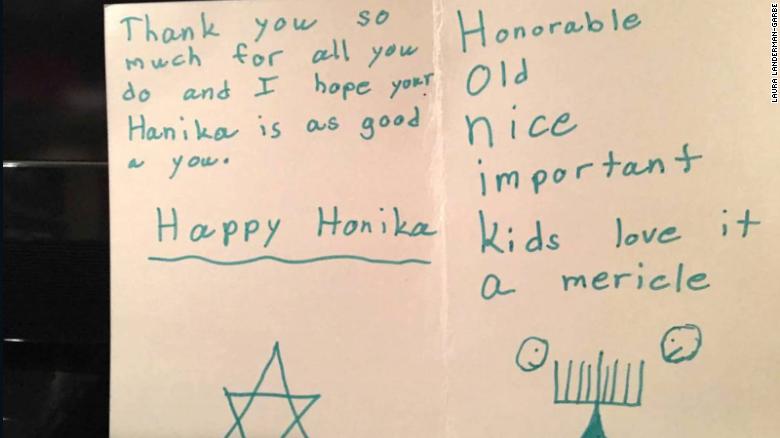 People from a wide range of holiday traditions send in cards.

At first, the project only sent cards to naval troops, but after a World War II Marine veteran urged her to send cards to every branch of the military, Landerman-Garber couldn't say no.

In 2018, she expanded her project to include all five branches of the military and began the nonprofit with a goal of sending 5,000 cards to each branch in 2018.

Again, she smashed her goal, sending out almost 50,000 cards across the globe, she told CNN.

This year, it's bigger than ever

Instead of the 25,000 cards that she had planned to send this year, Landerman-Garber will be shipping approximately 100,000 holiday cards around the world.

She has received cards from 32 US states, as well as Canada and Guam. 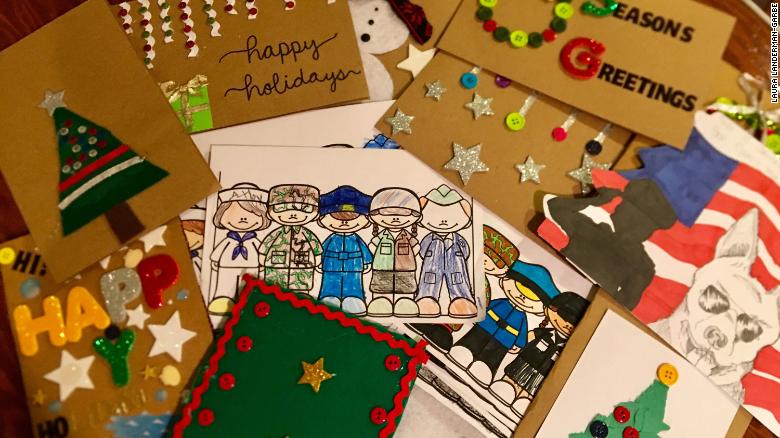 People who write messages are encouraged to decorate their cards, resulting in a fun array of designs.

In the cards, people often share their own holiday traditions.

Many of the 2020 presidential candidates have participated, Landerman-Garber says. She has gone out of her way to get messages from candidates including Mark Sanford, Elizabeth Warren, Joe Biden and Bernie Sanders.

"I just love the idea that whether you're a presidential candidate -- and those people have a lot of experience in our country -- or you're a 3-year-old preschooler that you can send holiday cheer to someone that's away from home and let them know you appreciate what they're doing," Landerman-Garber says.

Some of the messages are priceless

The contents of the cards range from hilarious to profound.

One of the funniest, she says, is from a little girl who said, "Dear Mike, My name is Tori and my best friend's name is Victoria. She loves you and I'm just telling you that."

"Who is Mike?" Landerman-Garber says, laughing.

On the other hand, some children's messages are incredibly moving.

She recalls one that read, "Dear sailor, I'm very lonely. Are you lonely? But when somebody loves me, I feel better. How about if I love you?"

It's these types of cards that move Landerman-Garber to tears, she says, and reaffirms the reasons she puts so much work into her project.

"In spite of all of the divisiveness in the country right now, in spite of all the infighting and between fighting -- I know this sounds like a Hallmark card -- I really do believe they have in their hearts to do the right things, to be kind."