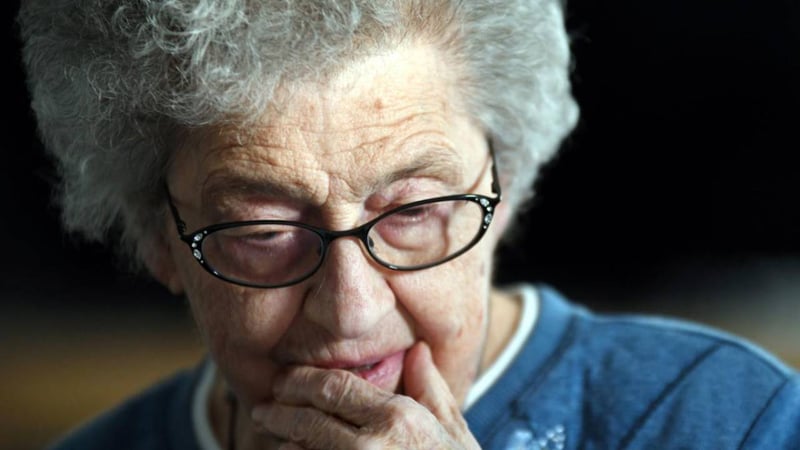 With piles of documents scattered across her dining room table detailing her struggles after she was scammed out of her life savings by Jamaican criminals, 90-year-old Edna Schmeets looks at her lap, twists her fingers in anguish and begins to cry.

She struggles to talk through the tears, to tell what it’s been like since it began with a phone call from a smooth-talking stranger eight years ago telling her she’d won $19 million in a lottery.

“That was a long gall dang time ago,” she whispers. And later: “It just keeps dragging on and dragging on.”

The courtroom part of the case is over, after seven years. All 31 defendants, including 14 Jamaican nationals extradited from that country, have been prosecuted. A few remain in federal prison, but most have finished paying their debt to society.

Though not in the eyes of Schmeets and her four children. Schmeets wants her money back. All $400,000 of it.

Now that the headlines have faded, Schmeets is hoping the U.S. government doesn’t forget about her, or any of the other victims of the scam that authorities identified in 31 states. Her plight launched what became the first large-scale Jamaican lottery scam case prosecuted in the U.S., she and her family point out, and they went to great lengths to work with authorities and help put the suspects behind bars.

Schmeets, who lives in a modest home in the small North Dakota city of Harvey, became the face of the case. But what she’s received so far in restitution, compared to what was taken from her, amounts to pennies on the dollar, and she’s having a hard time getting any answers.

Federal attorneys, who recently won an award for their work cracking the case, say they’re just as dedicated now as they were before, and they’ll do everything in their power to get at least some of the victims’ money back. But they acknowledge it won’t be easy or quick, and experts in the field of criminal restitution agree.

“I’m so disappointed,” she says, almost to herself, staring at her dining room floor.

The scam was run out of a Jamaican mansion where mastermind Lavrick Willocks -- who personally scammed Schmeets --  lived with his mother, Dahlia Hunter. The operation bilked more than 100 mostly elderly Americans out of more than $6 million, according to authorities.

It worked this way: Scammers called victims about bogus lottery winnings, persuading them to send advance fees or so-called taxes to receive the purported winnings, then keeping the money without paying anything to the victims. Authorities dubbed the case “Operation Hard Copy,” a reference to lists of prospective victims’ contact information used by scammers.

Looking back, Schmeets wonders what she was thinking in 2011 when she began sending large checks, provided her credit card number, borrowed money from her sister and cashed out life insurance policies. She even allowed the scammers to try to launder $25,000 from another victim through her bank account.

“I think about it every day; I always keep beating myself up,” she says softly. “How could you be so dang stupid?”

But Schmeets, then 82, had lost her husband not long before and also wanted to help her children and grandchildren out financially. She was vulnerable to being preyed upon, said Jeff Schmeets, one of her three sons.

“I’d come in here sometimes and I’ll tell you what, she would be looking at them papers and crying,” he said.

Edna’s children with the help of a bank worker eventually learned what was happening and alerted authorities, who launched an investigation in 2012. Suspects were caught and prosecuted over the next seven years.

Sanjay Williams, accused of being a major player in finding potential victims for the scam, took his case to trial and lost. He got a 20-year-sentence and was ordered to pay more than $5.7 million in restitution. Melinda Bulgin, a Rhode Island woman who worked for an airline and was able to use cheap flights to transfer money from victims in the U.S. to Jamaica, also lost at trial. She got four years in prison and was ordered to pay $333,000 in restitution.

The bulk of the suspects accepted plea deals with the government under which they got much shorter prison sentences and were ordered to pay restitution. Willocks was the exception at sentencing because authorities said he was the ringleader -- he got six years in prison and a restitution order for $1.5 million.

Schmeets testified for the government, including helping convict Williams. She did numerous interviews with the media through the years, bringing attention to the case.

“Every time you opened up a paper it was ‘elderly Harvey woman lost all this money,’” Jeff Schmeets said.

After Willocks pleaded guilty in July 2017, Schmeets sent a victim impact statement to the court saying “I am physically and emotionally stripped out." Her situation hasn’t improved much the past few years. She contemplates just about every potential purchase, immediately ruling out any major expense.

“It’s impacted my life because I don’t have any savings whatsoever,” she said.

She has written pleas to the court and to a former U.S. senator but gotten little in the way of responses, and even less money. She has received three checks totaling $287 and is told that another check for $138 is pending.

“We’re making every effort to secure every dollar of restitution that we can possibly unearth and collect,” he said.

But there are numerous challenges, including that many of the defendants living in a foreign country “adds another layer of bureaucracy,” Assistant U.S. Attorney Jonathan O’Konek said.

Scammers also have already spent a lot of the victims’ money, according to Assistant U.S. Attorney Nick Chase.

"The fraudsters in Jamaica are living lavish lifestyles. They're having parties where they burn money, where they're washing their nice cars with champagne," he said.

The government remains “highly motivated” to “get every dollar that we possibly can,” Wrigley said, but he added, “I don’t know what that figure is going to look like."

Collection of restitution often is limited by an offender's inability to pay. Many victims wait years before they receive any money, and they might never receive the full amount they’re owed, according to the National Center for Victims of Crime.

The U.S. Government Accountability Office studied Justice Department data and found that at the end of fiscal 2016, $110 billion in previously ordered restitution was outstanding, and federal prosecutors had identified $100 billion of that -- or 91% of it -- as being uncollectable due to the offenders’ inability to pay.

“Sadly, what you’re seeing here (in the scam case) is all too typical, where victims are promised substantial restitution but the reality is much less,” said Paul Cassell, a University of Utah law professor and special counsel with the National Crime Victim Law Institute.

“In general, we’ve observed -- we being the victims movement -- oftentimes when prosecutors get that conviction, they close that chapter and move on to the next case,” Cassell said. “And they don’t give as much attention to collecting restitution as the victims movement would deem appropriate.”

Staff in the U.S. attorney's office are spending "literally hundreds of hours" on the restitution issue, according to Chase.