John Legend's controversial rewrite of 'Baby It's Cold Outside' is here 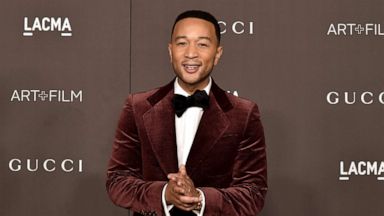 After a healthy buildup of excitement and scrutiny, John Legend's highly anticipated cover of "Baby It's Cold Outside" featuring Kelly Clarkson is finally here.

Th single, with new lyrics written by Legend and comedian Natasha Rothwell, went live at the stroke of midnight on Friday.

Though the lyrics to "Baby It's Cold Outside" have been viewed by many as outdated and offensive in the era of Me Too -- last year during the holiday season, several radio stations refused to play it -- song purists mainly lambasted the "All of Me" singer for heavily revising the part typically sung by the male.

New lines include "It's your body and your choice" and "I want you to stay, it's not up to me."

The politically correct duet immediately starts with Legend showcasing that there are absolutely no strings attached to Clarkson's visit.

"I really can't stay (Baby it's cold outside)/ I gotta go away (I can call you a ride)" are the first two lines in the heavily retooled track, setting the tone for the rest of their exchange. However, the song does break its serious tone to include a dash of unexpected humor.

"My mama will start to worry (I'll call a car and tell them to hurry)/ My daddy will be pacing the floor (Wait, what do you still live at home for?)" the lyrics continue.

However, naysayers maintain Legend went too far with his edit. His harshest critic was Deana Martin, daughter of the late Dean Martin, who told "Good Morning Britain" earlier this week that Legend's new lyrics made her father's song even more sexual.

"You do not change the lyrics to the song," Martin said. "I think what he's done is, he's stealing the thunder from [composer] Frank Loesser's song and from my dad. He should write his own song if he doesn't like this one, but don't change the lyrics. It's a classic, perfect song."

"Baby It's Cold Outside" is part of John's deluxe edition of "A Legendary Christmas," which is out now.