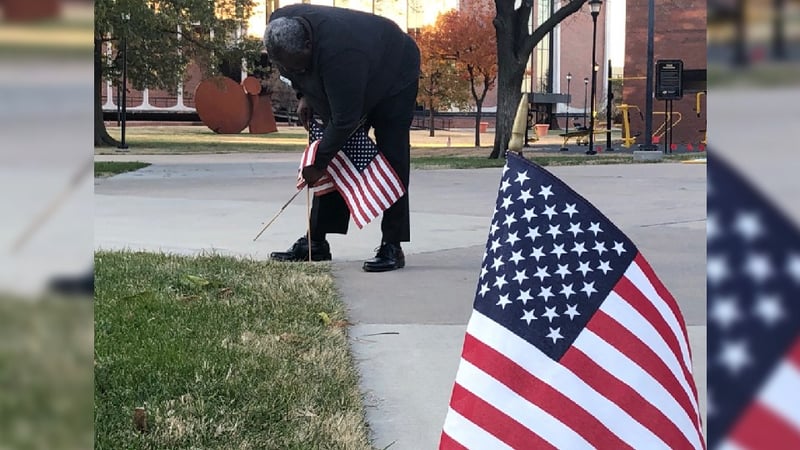 Students and staff at Wichita State University are placing hundreds of flags around campus to raise awareness for suicide, specifically among veterans.

Micheal Bearth with the student government association said he remembers brothers he lost while serving in Afghanistan as he places the flags.

"I felt the pain in seeing what happens after it for somebody that I've been close with and I've called a brother, said Bearth, "That they felt that they had no other option, really hits me hard."

The Department of Veteran Affairs reported that  22 U.S. veterans take their lives every day. That's equals more than 8,000 veterans every year.

"Freedom is not free, there's a cost that comes along with it," said WSU Director of Military and Veteran Services Lieutenant Colonel Larry Burks, "This is something that points to the continued need for us to do things with mental health and mental awareness for our community, and especially with our veteran population, because these things should not happen."

A card and dog tag with a crisis number for anyone to call is attached to each flag.

Bearth explained that simply have someone to talk to can make a difference.

"They may not fully comprehend, but they understand that you're going through something, and are there for you, can make all of the difference in the world."

The Student Veterans Organization is encouraging participants to take the card, take a selfie with the card, a post a picture to social media using the hashtag #SVO22.

Each selfie counts as one entry for a drawing for an Amazon gift card.

If you're struggling with suicidal thoughts and you need someone to talk to call Crisis Line at 1-800-273-8255.