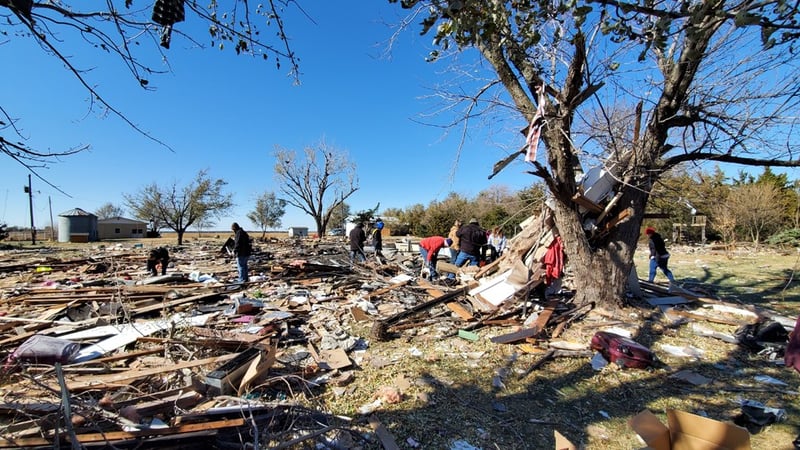 Friends and family dug through rubble near Galva Thursday afternoon, trying to salvage anything still in tact after a house explosion.

Kimberlee Carlson and her husband Richard were not at home when their house exploded around 5 p.m. Wednesday. The blast from the explosion could be heard as far away as McPherson and Lindsborg, according to firefighters.

"It's pretty surreal," Kimberlee said. "You're pretty numb. You don't quite know how to process it all."

The Carlsons lost their three dogs, a pet pig and several cats in the blast. Galva Fire Chief Wayne Williams said he's never seen anything like it.

"It's just leveled," Williams said. "There's pieces 150 feet in each direction. Everything from pieces of a stool to a washing machine with a ring out. Everything is in pieces."

"This stuff is all replaceable," Kimberlee said. "We lost our family pets. That probably hurts more than anything. They are irreplaceable. Where do we even start? Where do we start to rebuild?"

Richard was at work when the blast happened, and Kimberlee said she would have normally been home at that time.

"I would like to say it was a God thing," Kimberlee said. "I had some last-minute stuff come across my desk at work that I had to get done. So, I completed that, and I was stopped at a store to grab a couple things."

Both Kimberlee and the fire chief said those stops on the way home probably saved her life.

"I think so," Williams said. "Definitely. If she'd have pulled up, she wouldn't have survived a blast like that."

The state Fire Marshall was investigating the exact cause of the explosion, but Williams said he believes it's propane-related.

"It's propane," Williams said. "Propane leak of some type. They'd had service men there earlier in the day, they thought they smelled propane."

"We had had some heater issues and had some repairs made," Kimberlee said. "But we don't have any idea if that caused it or something."

Kimberlee said their next step is to find a place to live.

"Then, we just have to start rebuilding," Kimberlee said. "And put one foot in front of the other. That's all we can do."

It happened at around 5 p.m. on 24th Avenue near Galva. Investigators say there was a propane leak at the home, but they're unsure what exactly sparked the gas. The house was destroyed.

The man and woman who lived at the house were not home at the time. Three dogs, several cats and a pig were killed.

According to fire officials, the residents reported smelling natural gas earlier in the day.

The state fire marshal's office is investigating. Friends and family were on scene Thursday helping with the clean-up.

Elijah Higgins
Check out these photos from across KAKEland snapped by our viewers, staff and local officials. Do you have pictures to share with us? Email them to news@kake.com.