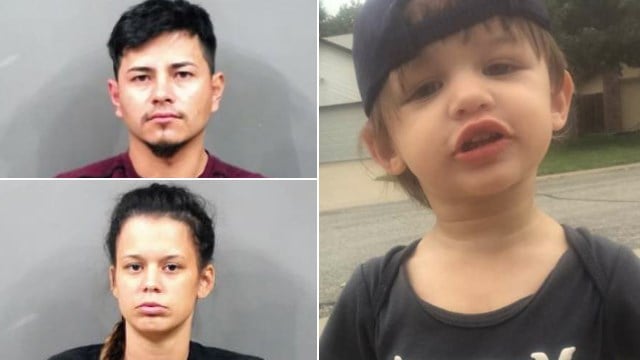 A newly released court document says a 2-year-old Wichita boy died of blunt force trauma, allegedly at the hands of his mother and her boyfriend.

Stephanie Aviles, 24, and Bernardo Gonzalez-Mejia, 31, are charged with first-degree murder in the death of Jacob Aviles. Officers responded at around 11 a.m. Sunday, September 29 to assist EMS on the report of a toddler not breathing at a home near Kellogg and Seneca. Jacob was pronounced dead about 30 minutes after they arrived.

A probable cause affidavit says Jacob had visible bruising to his head, back, buttocks, stomach, arms and legs.

Aviles told detectives that prior to Jacob's death, she had left home with her daughter and left Jacob in the care of Gonzalez-Mejia. She said her son was sitting at the kitchen table eating and was fine.

She said Gonzalez-Mejia called and said that Jacob had fainted and that he had put rubbing alcohol under his nose, but he was still unresponsive. Aviles said she would come back home.

Aviles said Gonzalez-Mejia called again while she was en route, saying Jacob was turning yellow and he saw a piece of meatball and took it out. He said Jacob still wasn't responding, and Gonzalez-Mejia told her to call 911.

Aviles arrived home as medical personnel were working on Jacob.

The document says when Aviles was told about the bruising, she said she and her boyfriend never hit her children.

"She said she had noticed when (Jacob) was left alone with Bernardo he would have an injury and Bernardo would explain it away," the document says.

Aviles told investigators that she was recently leaving her 6-year-old son with Gonzalez-Mejia to see if he was hurting Jacob on purpose. She said her 6-year-old never reported anything.

She did say that Jacob recently had two serious injuries to his genital and that she took him to the hospital for treatment on both occasions. She said those injuries happened when Gonzalez-Mejia was caring for Jacob.

When detectives interviewed Gonzalez-Mejia, he denied causing any injuries to Jacob.

According to the affidavit, he said some injuries were caused when Jacob fell or something fell on him. He admitted that the night before, he did hit Jacob with a belt on the buttocks over his diaper. He said he did not hit him hard, but Jacob did cry.

He said he struck the boy because he was not eating his food, even though he was aware Jacob wasn't feeling well.

An autopsy revealed that Jacob suffered multiple contusions of the head, truck and extremities, had blood in his abdominal cavity, multiple lacerations of the tissue that attaches organs to the body wall, and a healing rib fracture. The boy's death was ruled a homicide, but the document sheds little light on exactly how and he suffered those injuries.