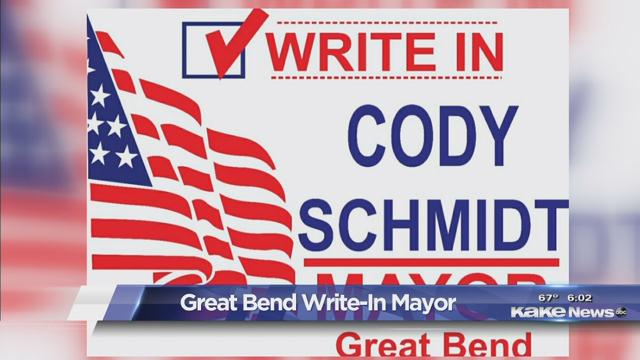 An overwhelming amount of people in Great Bend voted their next mayor by writing him in on the ballot. Cody Schmidt will take over in 2020 and he’s focused on growing the community.

"I want to work together with the people that are currently in place for our future today so we can plan for tomorrow. One of my slogans this year and this campaign was “I’m a man that gets up every morning and goes to work just like you," says Mayor-Elect Schmidt.

Schmidt won his campaign by a landslide against three other opponents who were named on the ballot.  After some hesitation, the father of two started his write-in campaign. He looks at his kids as motivation. “I’m willing to give up my time and sacrifices to make this community better," says Schmidt.

Great Bend election workers told KAKE News, even though write-ins are more common in smaller communities, the city hasn’t seen it happen in decades. About 16,000 people live in the city of Great Bend, but the City Administrator says only about 2,000 people voted in the election.

"If we’re not willing to put our names on the ballot, at least we can put support behind candidates who share our same vision and our same values for our community," says Kendal Francis, City Administrator

Francis is disappointed in the voting turnout, but he’s hopeful Schmidt will step in and be just what the people need. "Moving forward, I'm excited to work with him and have some new ideas and I really just want someone that has a good vision for Great Bend and strong leadership."

Schmidt knew the road to becoming the mayor as a write-in candidate was going to be challenging, but he’s thankful to be apart of a city wanting change. “But I can’t tell the community thank you enough. I think the big this is just coming back together, being small town USA and working together to grow this community.”

His term will last two years starting in January.