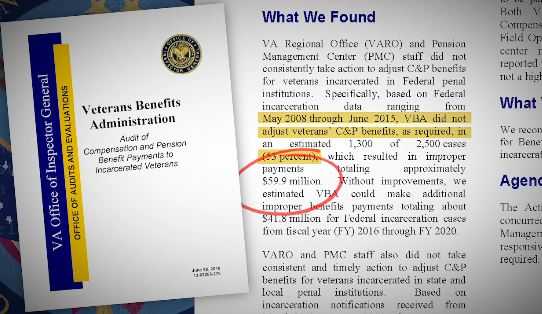 Right now, there are 181,000 veterans serving time in federal prisons and some are still receiving full benefits, despite VA policy.

One of them, according to a complaint filed with the Department of Veterans Affairs, was a man convicted of planning to blow up a Somali apartment building in Garden City.

Lula Harris tipped police off to the plot in 2016. She was the common law wife to Curtis Allen and the two had been in a relationship since March of 2006.

She was bringing Allen lunch at the G&G Mobile Home Dealership in Liberal one day and what she saw inside made her panic.

“There were explosives being cooked on the island,” Harris said. “I questioned and he acted like it was no big deal. He proceeded to tell me who bought, in their group, who purchased what item and just acted calm, cool and collected.”

Allen, Gavin Wright and Patrick Stein were plotting to blow up an apartment complex where the immigrants lived in Garden City.

She called police and eventually the three were convicted. They’re serving time in prison now.

But three years after she first walked into that trailer, Harris learned something that made her panic again.

That’s because Curtis Allen also served in the military, both in the Marines and the Army National Guard. And she said she can prove that he is still receiving full benefits despite his incarceration.

According to records she found and calls she made, he is still being paid in full – and by her calculation, he’s received more than $20,000 even after he was convicted.

VA policy does allow benefit payments to incarcerated veterans, but only about ten percent of the original allotted amount. She said he’s receiving nearly $1,368 each month. So Harris filed a complaint with the VA, telling the agency he was in a Colorado prison. But she said she hasn’t received any response.

“I tried to talk to the high-ups at the VA,” she said.

The VA wouldn’t speak to KAKE News for an interview, and each response directed back to policy.

The statement said that it is the veteran’s responsibility to notify the V.A. of incarceration and date of release. However, because veterans do not always notify the agency of incarceration, the VA established a data matching agreement with the Federal Bureau of Prisons and the Social Security Administration to help identify incarcerated VA beneficiaries.

The report from the VA Office of Inspector General, showed that from 2008 to 2015, the Veteran’s Benefits Association didn’t adjust payments to 53 percent of veterans incarcerated in federal facilities. The study estimated the cost was nearly $59.9 million.

Those over payments were higher for inmates at the state and local level - $162 million according to the organization.

“And you wonder where that money goes? I mean, where does it go?” asked Rep. John Wheeler, who sits on the state Veterans and Military Committee. “An inmate in the state or federal prison is not allowed to have that much money in their account. It’s shameful.”

Wheeler is from Garden City and said that three years later, that plot is still on the minds of many.

“That somebody, although he’d earned those veteran benefits, had come to develop a dark soul and hatred, contempt for an entire community… that’s willing to blow it up and take an entire block out? You can’t be normal and not be angry about that,” he said.

Wheeler is a veteran himself and was outraged at the evidence KAKE News had obtained.

“I do respect that this gentleman earned his pension,” he said. “But he lost it when he undertook to murder and slaughter.”

V.A. policy said that any veteran caught receiving full benefits would have to forfeit. But Wheeler isn’t convinced that is happening either.

“That a person receiving benefits is to self-report if they’re sent to prison? That’s not going to work. It’s just not going to work,” he said. “I think Congress, the V.A. and whatever we can do on the state level have to address this issue so this stops.”

He promised to bring the matter up again in Topeka next year.

By Harris’ calculations, Allen will get another $3,000 in payments if nothing changes before then. That’s why she came forward.

She was already a tipster once. Now she’s talking again, hoping money meant to help our nation’s heroes, goes to veteran’s programs and homes – not to prisoners.

Under the same policy, when someone has completed a sentence, payments return to the full amount selected prior to conviction.

A family member told KAKE News that Allen did receive a notice from the V.A. in the last few weeks on the matter. But according to the policy sent, that should’ve happened 61 days after conviction.

Requests to speak to Allen directly have not been answered.