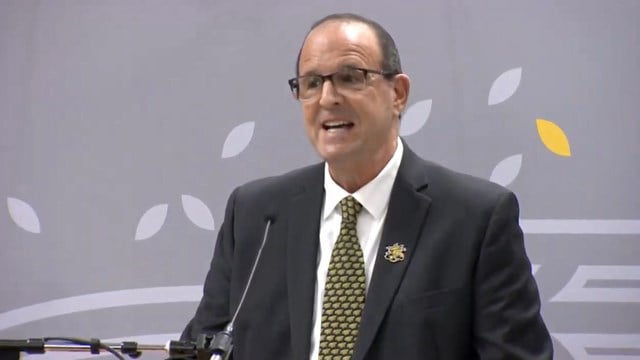 Stepping into his new role as president of Wichita State University, Jay Golden doesn’t see a situation where he has to start from scratch.

Instead, his intention is not only to build on the growth of the school in recent years but also to help find new ways to move it forward with all potential stakeholders having a seat at the table.

“I’m not coming in here as a change agent,” Golden said Thursday following his appointment as the 14th university president.

Jay Golden was previously vice chancellor of East Carolina University in Greenville, N.C., and was chosen after a closed-search process led by a 20-person committee.

When he takes the help in January, he will succeed who many saw as that change agent — the late John Bardo.

Golden said he didn't know Bardo, but it would be impossible for anyone in higher education not to be impressed by what he helped build.

From the Innovation Campus to the emphasis on applied learning, what WSU has now, Golden said, the transformation is the envy of other institutions. For him, it will be about making a good thing even better.

“My goal is to build on those type of programs that (Bardo’s) done … and ensure that all of our faculty and our students are part of that process as we move forward,” Golden says.

The Wichita Business Journal says that Golden has other goals as well: transparency, inclusion and a focus on building an academic environment to help students find good jobs and grow the regional economy.

Golden said he plans to bring a leadership style that communicates with all stakeholders. He also hopes to challenge other university leaders on what programs can grow and what new ones can start to help accelerate those goals.

That includes thinking more like an entrepreneur when it comes to  meeting another of his biggest goals — helping cap and offset the cost of an education.

One example he offered was putting students on research proposals. It might be the full-cost of tuition or just $1,000, but even the latter, he said, could help take a bit of the stress out of paying for college.

“That’s something all faculty should be doing,” he said.

The industries that need those students after graduation, he said, have shown a willingness at WSU to put skin in the game, particularly in the business partnerships that have helped spawn much of the Innovation Campus. Those include Airbus Americas Engineering, Spirit AeroSystems Inc. (NYSE: SPR) and the Textron Inc. (NYSE: TXT) division of Textron Aviation that have physical locations at the university.

Those offices blend with the state-of-the-art technology and research capabilities Golden believes are partnership examples that can expand to other departments at the school and other local businesses.

As he looks for ways to help drive growth, Golden said the most important thing he and anyone else in Wichita can do is share with others the story of what is happening here.

“When they know the things that are happening in Wichita and at Wichita State, they’re going to be blown away,” he said.