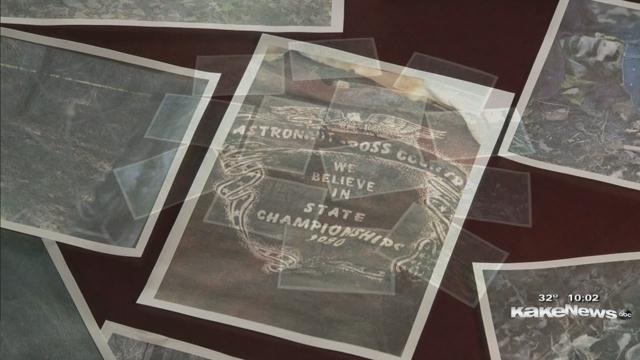 EDITORIAL NOTE: What you are about to read are details of a homicide. There are some images from the crime scene, showing the body as it was found decades ago. The images and subject matter may not be fit for all.

Jeff Collie was preparing for another hunting trip in October 1987 just north of I-70 in Dickinson County. The weather was perfect. Hunters often spent time on land near Deer Road and 2400 Avenue. Soon, he stumbled upon a murder scene.

“Just happened to be at the right spot at the wrong time, apparently, and seen the body laying there, which at the time was bones and clothing is what it was,” he said.

Now, 32 years later, standing yards away from the spot where he found a woman’s body, he’s still struggling to understand.

“It was strange finding it,” he said. “It's just something you don't expect. It's out here in little town Kansas. ‘What happens there?’ It was something really out of the ordinary.”

It wasn’t only out of the ordinary, but a true mystery.

A woman was shot and killed. Yet, who was she?

Collie’s family lived in the area. Weeks before, they told him about a strange truck driving on the rural and somewhat windy roads. He didn’t think anything of it until a distinct stench.

“You could smell a dead animal in the area. That's what it smelled like anyways, like a dead animal or a cow or something dies,” Collie said. “You smell it. Of course, I never thought anything about it. Just a dead critter.”

The smell, he believes, is of the woman who was left for dead.

When he found the woman’s body, Collie called police. Soon, they rushed to the scene with their lights and sirens. To this day, investigators are still trying to find out the woman’s identity. They collected evidence. It took time, but they have her dental records and her DNA was entered into a national database, the National Crime Information Center (NCIC). If a family member’s DNA is put into the system – voluntarily or due to crime – they would learn of a match, said investigator and Capt. Jerry Davis, with the Dickinson County Sheriff’s Office. Tips have taken them to different parts of the country.

“We've gotten some tips over the years on possible matches through NCIC,” he said. “We followed up on them, and they all kind of lead to a dead end. So I really haven't had any luck in identifying her.”

Jane Doe is a black woman believed to have been in her 40’s or 50’s. She was likely 5’2’’ to 5’5’’. Her body was severely decomposed with mostly bone left behind. It's believed she was killed between July and September 1987.

Clothes were on Jane Doe, including Sugar Babies brand tennis shoes and Jalapeno brand denim jeans. Looking through copyrights for the brands, they appear to have been sold through department stores. At one point, J.C. Penney used the Sugar Babies name. Jane Doe was also wearing a shirt from Astronaut High School in Titusville Florida. The maroon shirt read, “Astronaut Cross Country – We Believe in State Championships 1980.”

The Titusville Police Department searched its records and said no woman matches Jane Doe’s description. One investigator said it’s possible the shirt was bought at a thrift store and the woman is not connected to the high school.

Still, KAKE News reached out to Astronaut High School to learn more about the cross-country team. It had years of championship wins. We requested a roster and contacted several former students. Nobody knows Jane Doe. Her case is one of 25 from Kansas listed on the NamUs database, featuring missing and unidentified people.

For the longest time, the only piece of evidence publicly shared on the Department of Justice website was a photo of the t-shirt Jane Doe wore. We asked Davis if other photos were available. He said the county didn’t have them digitized, but a forensic expert did have the film at Kansas State University. Following requests from KAKE News, the county was able to work things out with the expert and get the photographs converted to digital prints. They released them to us.

Davis reviewed the photographs and got in contact with Collie, who helped pinpoint the exact area where Jane Doe was found. Though you can see the interstate from the road leading up to the murder scene, it’s somewhat secluded. Some speculate Jane Doe’s killer was familiar with the area.

“It's not something that someone from I-70 would just haul someone out here,” Collie said.

The roads are windy and can be confusing for a stranger. It’s a place you’d go to if you knew it well, Collie said.

Recently, the Dickinson County attorney started a community fundraiser to pay for headstones for Jane Doe and a separate homicide victim, a John Doe from the 70’s. Despite all the time that’s passed, Davis believes the cases can be solved.

“Oh, yeah, I don't I don't give up hope. There's always a possibility,” he said.

Possibility to getting closer to finally learning her name and finding her killer – something Davis and Collie hopes happens soon.

“I think it's a valiant effort on their part to do it, to try to get all the pieces put together. To figure out who she was, where she lived,” Collie said. “She’s somebody's daughter. Could have been somebody's mom. She belonged somebody somewhere, you know, and I'm sure they're probably wondering what happened.”

Anyone with information on Jane Doe or the crime should contact the Dickinson County Sheriff's Office at (785) 263-4041.