Sheriff's deputies, moms and strangers show up to celebrate 3-year-old's birthday party after no one came 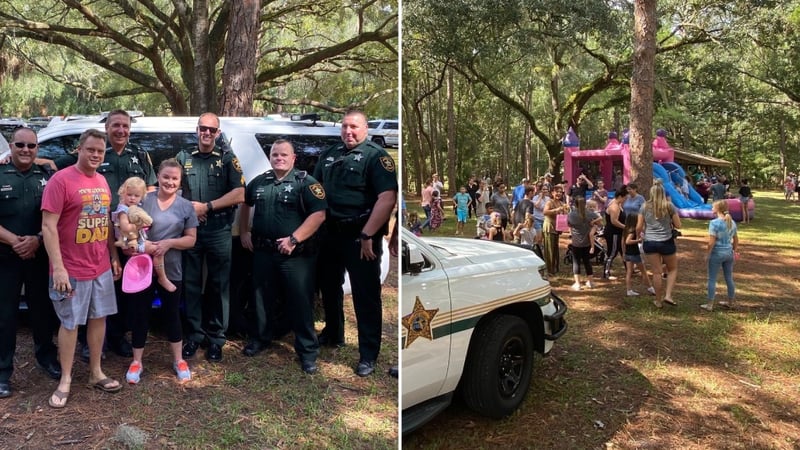 An entire community helped turn what initially looked like a birthday bust into an unforgettable birthday bash for one 3-year-old Florida girl.

Cindy Davis shared photos on Facebook from her daughter's birthday party all set up at John Chestnut Park in Palm Harbor with a message that no one came to celebrate.

"No one showed up to my 3 year olds Birthday Party today. If anyone wants to bring their kids, there is a bounce house," Cindy Davis shared in her post.

The post quickly garnered attention from many local parents and even the county's sheriff's office, who sent a handful of officers to help shower the birthday girl on her special day.

"It turns out, no one showed up at 3-year-old Paisley’s birthday party," Sgt. Spencer Gross of the Pinellas County Sheriff's Office told ABC News.

Sgt. Gross said the message was forwarded to patrol deputies and several squad members "took the initiative and responded to the park to wish her a happy birthday and even brought Paisley a birthday gift."

"Word spread very quickly and many arrived to wish her a happy birthday," he added.

One mom, who didn't know Paisley or her parents, told ABC News she was moved to go and bring her own daughter to the party after reading about it on social media.

"A friend shared the mom's post in my local mom group and I felt compelled to go," Lea Lacey said. "Apparently so did dozens of other families. It was so sweet."

Lacey said as a mom she put herself in Davis' shoes and the thought of packing up all of the party favors and food and having to explain to her daughter why nobody came was "heart-wrenching" which was "why I rushed home and picked up my daughter and got there as soon as I could."

Lacey met Paisley's mom briefly as she placed her gift on the table and introduced herself "and she said, 'I wasn't expecting this turn out.' You could tell she was just shocked."

"It was all so heartwarming. The kids were having a blast," she added.

"I think that this restored faith in humanity for a lot of people," Lacey said. "The news is full of negative stories and it's important to share the positive ones -- like a whole community coming together on short notice to support a sad little girl on her birthday."