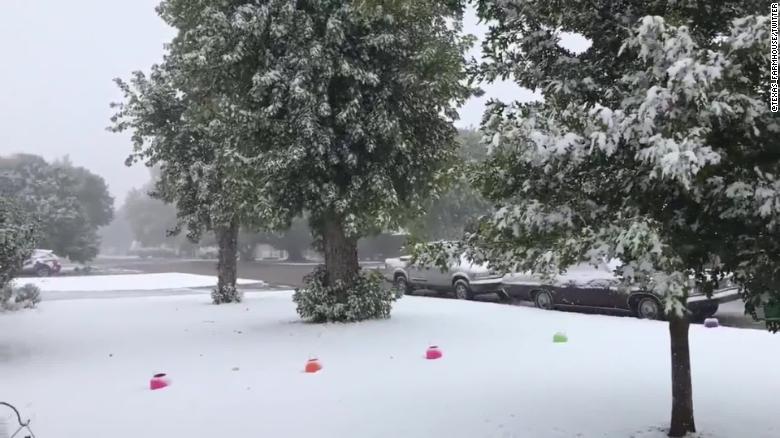 Heavy snow fell in parts of the Texas Panhandle on Thursday, causing near whiteout conditions in Amarillo, according to the National Weather Service.

Residents posted videos of the rare October snow storm on social media that show their fall decorations and pumpkins covered in white flakes.

Snow is uncommon for Amarillo this time of year but not unheard of, according to CNN meteorologist Taylor Ward.

One person even captured the phenomenon "thundersnow," the combination of snow and a thunderstorm, and shared the video on Twitter.

The preliminary snow reports show that 4 inches of snow fell five miles west of Amarillo, according to the NWS. They said that the largest drifts at their office in Amarillo range between 10 and 12 inches.

People weren't the only ones going outside and enjoying the rare storm; a pup named Maggie ran around her backyard in Amarillo and dug her nose in the fresh snowfall.

The Panhandle will continue to get snow throughout the evening, but it should wind down by midnight, according to Ward.

"By the time it's done, a few spots could end up with around six inches," said Ward.