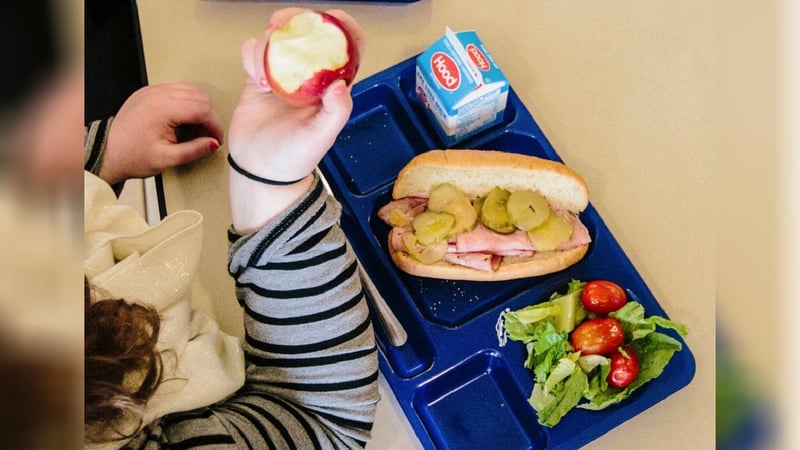 The Cherry Hill school district passed a policy that prohibits high school students who owe $75 or more in meal payments from "participating in extracurricular activities, purchasing tickets for school dances including proms, attending class trips including the Senior Trip, and purchasing a yearbook," according to a detailed outline of the policy.

Middle school students who owe $75 or more in school lunch fees will face the same punishment, while elementary school students will be barred from participating in after-school events and attending class trips.

The policy, which was approved last Tuesday at a board of education meeting, received swift backlash from parents and students.

Video of the board meeting, which was posted to the district's website, showed students, teachers and parents addressing the board to condemn the policy.

A student bites into an macintosh apple at Westbrook Middle School in Westrbook, M.E., on April 9, 2015.

Dr. Vibiana Cvetkovic, whose grandchildren attend schools in the district, said at the meeting, "there are many reasons why parents can't pay. It is an elitist assumption on the part of this school board that parents are not paying a bill because they don't want to."

Jacob Graff, a senior at Cherry Hill East, said, "If my mom or dad can't pay for lunch, why should I be restricted from my passions?"

"What are colleges gonna think?" he asked the board, noting how important extracurricular activities are on applications.

The school district had $14,343 in unpaid meal debt in the last school year from more than 300 students who had a debt of more than $10, according to NJ.com.

Superintendent Dr. Joseph Meloche said at the meeting the district's goal is "responsibility with compassion."

He urged those criticizing the policy to take note that it does not include a state statute, which would require meals to be withheld from students who owe lunch money.

"Money is certainly something that we have to deal with. That's our world, but that's not the most important thing that we're addressing in terms of the policy and the work that's being done," Meloche said. "It's about supporting children and supporting families ... sometimes the right thing is not the easy thing to do."

Multiple calls to the school district were not returned.