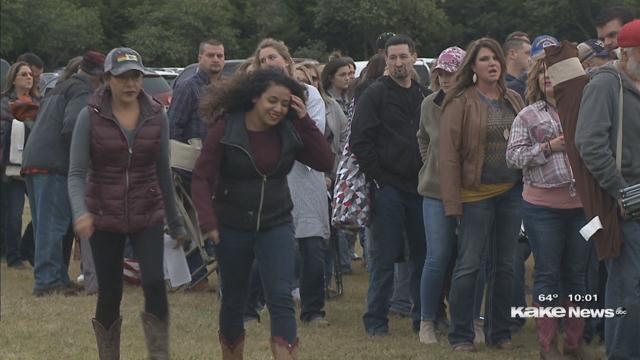 "We were majorly bummed out. We took off work yesterday and were preparing for it," says Angie Snyder.

Snyder and her daughter, Drew Peoples bought tickets to both Kansas concerts. The first, in Louisburg, cancelled Thursday night after wet weather soaked the farm. And in Douglass, the ground was also too wet.

"I live six miles from Douglass...It's all in fun, we're all here having a fun time," says Terra Lockwood.

"We live here, but were really hoping it'd be at like the farm at Douglass, but we were kind of sad it came here, but we still came to have fun," says Hunter DeGamo.

Hundreds of fans changed their plans and happily drove the extra miles to see Luke play, even some of his youngest fans.

"My mom said the concert got moved," says Jaiden Seaman.

Jaiden won a raffle for a shot at meeting the country star, and he says nothing, not even a venue change would keep him from that chance.

But some weren't that lucky. More than a dozen people called the KAKE News room and even more messaged us online, saying they couldn't make the trip and wanted to know if their money would be refunded. Online, the ticket company's refund policy says tickets cannot be refunded after purchase.

We also reached out to Luke Bryan's team about the refunds but have not heard back yet.