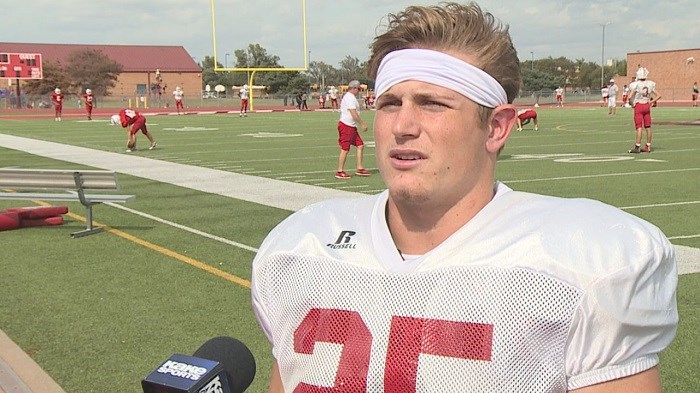 “I’ve put in a lot of work over the summer and the offseason going to camps and learning from the best college coaches from around the country,” Cox told KAKE.

“We always knew he had the talent, “ Maize assistant coach Rob Helm said. “He’s starting to show that he has a lot of football savvy in him and it’s making things a lot easier for him.”

Cox is leading the way for a young Maize offense who is averaging 48 points a game.

“We talked to him before the season that he’ll have to create a lot of his stuff early in the season and to this point he’s done that,” Helm said.

Caden announced on Thursday he was ending his college recruitment and signing with Kansas as a preferred walk-on.

“I grew up watching KU football early on,” Cox said. “I always wanted to go out there and play for them someday and I feel like they are on the change from what it’s been in the past.”

Ultimately his relationship with head coach Les Miles also proved to be a deciding factor in his decision to join the KU program.

“He just believes in me, that’s just something that very few people have done so far,” Cox said.  “I feel like I’ve been overlooked a lot from being in Kansas and he gave me a shot and I wanted to take it.”

As a walk-on, there’s no guarantee he’ll ever see the field. Something the senior back is embracing.

“Their class is full right now of commits so I’d be the 27th commit and I’d be a walk-on so if they sign everyone they have, they couldn’t sign anymore and I believe I have a shot to go out and play whether I’m a walk-on or not,” Cox stated. “I believe in myself and my abilities and believe that I’m good enough.”