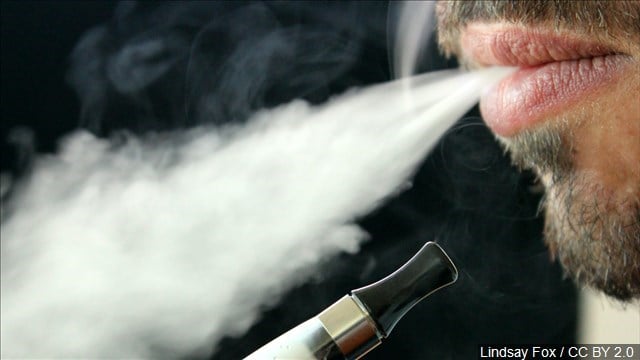 A sixth person has died in connection to vaping, and the Trump Administration has announced plans to crack down on flavored e-cigarettes. But advocates for vaping as a measure to stop smoking say they're being "unfairly targeted," when the real problem involves THC-containing products purchased off the street.

A spokesperson for the "Big E's" vaping store in Wichita, Jacob Campbell, said businesses like theirs are caught in the crossfire after reports of mysterious lung illnesses. Many of those reported illnesses and deaths are connected to THC products the local vape shops do not sell.

"We've had this going on for 15 years without a 'crisis' on our hands," Campbell said. "And all of the sudden there is a crisis of people even dying from the THC cartridges, for some reason, they're attacking vaping."

"People are going to get it one way or the other," Campbell said. "If we stop selling it, it'll become a huge black market."

"Smoking itself isn't safe," said Dr. Amy Seery with Via Christi Ascension. "So, just creating an alternative doesn't mean it is automatically safe."

If you've ever wondered what's actually inside the vape clouds, Campbell said it's a short list of ingredients: Vegetable Glycerin, Propylene Glycol, nicotine, and food-based flavoring.

"Vegetable Glycerin is what carries the vape," Campbell said. "What actually gives you the big cloud. Propylene Glycol is what carries the flavor and gives the big throat punch. Propylene Glycol is in a lot of things. It's in inhalers. It's in air duct systems in hospitals and stuff. It's a microbial. So, all those things, you're actually ingesting on a normal day basis in the first place. I mean, you eat it, you drink it."

Doctor Amy Seery said while the FDA approves those ingredients, they are not necessarily good for your lungs.

"A common type of flavoring, Propylene Glycol, that is fine when it's being ingested," Dr. Seery said. "But when it's vaporized and inhaled, I have no idea what that does to the lung in the long term."

Campbell said he agrees that children getting access to vaping products is a major problem. Visitors to Big E's are turned away if they're under 18.

"Really, that's what needs to be cracked down on, is age," Campbell said.

"I went to Quik Trip today, and some girl got some N-Joy packs, and they didn't even card her whatsoever," said Wichita State University student Emily Taylor. "And she's definitely not even close to being old enough to smoke, it looks like anyway. I feel like cigarettes are taken more seriously."

Some people at Wichita State University said they're glad for the government action on vaping.

"Health issues are an individual responsibility," said Nancy Koenig, who is auditing classes at WSU. "However, sometimes the government needs to step in and let people know what's really going on with products, so people can make an educated decision."

The chair for the Health and Human Services Committee in the Kansas House, Rep. Brenda Landwehr, said Kansas does not have any new laws planned regarding electronic cigarettes or vaping.