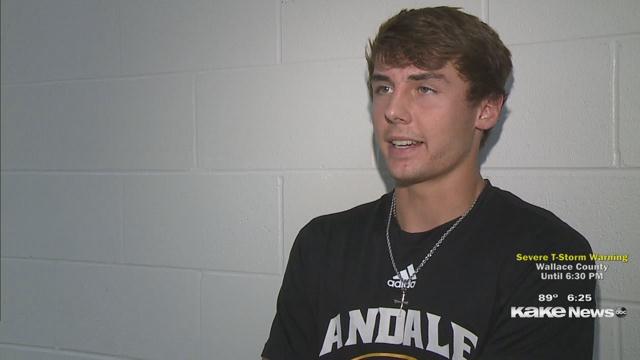 Andale made a statement in their season opening win over Mulvane. The Indians put up 43 points behind the stellar play of quarterback Easton Hunter.

“He’s probably the most overlooked kid in our area I guarantee you with his abilities to throw it and run it,” said head coach Dylan Schmidt. “He’s a dual threat quarterback.”

Andale is known for having a strong ground game and they took it to the Wildcats. They rushed for 423 yards as a team with Hunter wearing down the Mulvane defense and finding the end zone 4 times.

“We definitely went back to the same play a lot once we found out that the play was working for us,” Hunter told KAKE.

“The defense doesn’t really have a whole lot of time to react because we go at them so fast, we break the huddle and then we run the play within 4 seconds,” senior running back Mac Brand explained.

Leading up to his senior year, Easton split time at the quarterback position with Ethan Baalmann. The increased reps have been an adjustment for Hunter.

“It’s definitely a lot tougher,” he admitted. “Last year I could get a break this year it’s a lot more. We have to get our conditioning a lot better. “

“He was the MVP in our basketball league,” Schmidt stated. “ He was a great track athlete, baseball player, I  mean you name the sport he can do it. He’s also super dedicated. I mean he’s one of those guys that does everything all summer. He’s going all over the country whether it’s basketball, baseball, or football or whatever it may be.”