Stand Down Event takes place for homeless and veterans in Wichita 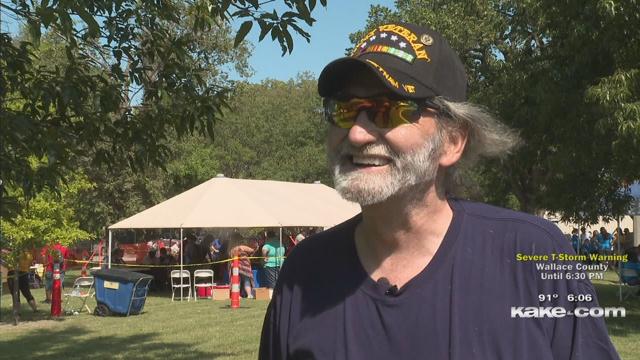 The homeless and veterans in Wichita were helped Wednesday at Hyde park during an event that offered them clothes, food, medical care and haircuts among other things.

James Dye is one veteran that took advantage of the homeless stand down event, which is open to the homeless, homeless veterans and veterans in general.

"This whole thing means a lot to me," said Dye, a U.S. Army veteran. "I wish I was in better health so I could help volunteer."

Dye served in Vietnam and is disabled. However, that didn't stop him from attending 2018's and 2019's event to get his haircut first.

"I was getting kind of shaggy," he said.

He also said he makes sure to check out all the different services that are offered. He has gone for the past two years because he said the services offered at the event are harder to get at the Veteran's Administration. He was also homeless for a period of time, but he said this event got him off the streets.

"It actually helped me get a place to live," Dye said.

"It's great man, it really is," said Willie Jacobs, a homeless man in Wichita. "Because there's still good people out here."

Some veterans in attendance were left speechless. One said he was thankful for help that would be hard to get otherwise.

Those that were in charge of the event said they wouldn't want things to be any other way in regards to helping these people out.

"It definitely fills my cup to be in this line of work," said Stephani Dykes, a coordinated entry specialist at the Robert J. Dole Veteran's Administration. "I enjoy it."

"We're doing things for veterans because that's who we care about," said Ron Boykins, a U.S. Army veteran and Wichita commander for Disabled American Veterans, a group that partnered with the veteran's administration to hold the event. "Our mission statement is fulfilling the promises of the men and women that serve."