A powerful 9/11 memorial in a small Kansas town 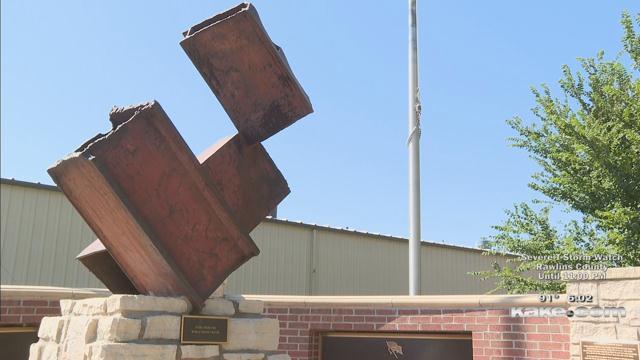 It's been 18 years since the attack on 9/11, shocking America. Now, thousands of miles from New York, in small town Kansas, a memorial for the heroes.  One of the stones read, "we have not forgotten, we will never forget, we will always care." Anthony may be a small town in Kansas, but they wanted to send a powerful message across the nation, to those affected on 9/11.

Part of the world trade center sits in a Kansas town of less than 2,500 people. The memorial also includes a stone from the Pentagon and soil from Pennsylvania, all from that day.

John Schott, the former Mayor of Anthony, teamed up with the entire town and raised thousands of dollars. After a dozen phone calls to New York City, he found the family of Joe Spur, a fallen firefighter from the Bronx. "He left behind his widow and kids, he said, we're in the middle of trying to finish a remodel job on his house that he had done. He said this would be a great place for it to go," says Schott.

Community members are honored to host such a special site in their town. "We thought this could be one thing that we could actually do that would make a difference and show the people that we do care here, even if we are in the middle of the united states," says Howard Hatfield, the assistant Chief of the Fire Department

Schott says the events on 9/11 changed him forever. He hopes the memorial will always serve as a reminder to honor the heroes, "none of those people were "superheroes," they were just ordinary people and they did their job and they were scared to death when they were doing it and they ended up making a difference."

Schott says he met the Spor family in New York back in 2002, he still keeps in contact with them to this day.