Team of the Week: Northwest Grizzlies 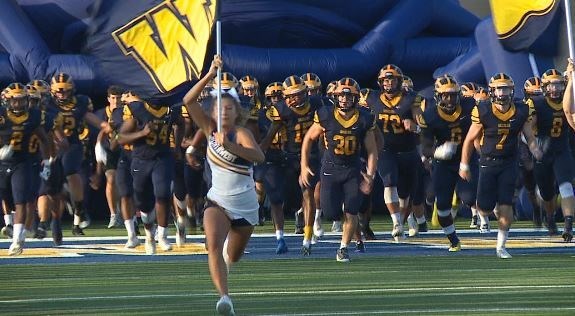 Northwest kicked off the 2019 season against rival Bishop Carroll on Friday. Leading up to the showdown with the Golden Eagles, the Grizzlies' coaching staff had concerns about how the team would perform.

"You know we didn't have a good week of practice," Northwest head coach Steve Martin said. "You know when you're playing your rival and a team you beat two games, I thought we'd be a lot more focused than we were this week."

Northwest was able to put one touchdown on the board in the first half and went to the locker room trailing 10-8 with plenty of adjustments to be made.

"We quit getting fancy," Martin told KAKE. "We have got to go back and that's on me. You have Reagan so you want to do all this fancy stuff when you have two new backs they're not able to handle that stuff."

After a scoreless third quarter, the Grizzlies' offense came to life. Reagan Jones connected with Zion Jones twice including the go ahead score with under 4 minutes to go.

"We just kind of got more assignments better that was really the main focus of changing the whole offensive scheme, so that was good," Jones said after the game.

It may go down as a victory, but sloppy play left the Grizzlies frustrated and vowing to play better the next time they hit the field.

"We talked about all week whatever defense could limit mistakes and whatever offense doesn't commit turnovers is going to win this game," Martin said. "Well, I'm a liar. I think we had 5 turnovers maybe 6, multiple personal fouls on just dumb stuff we showed our youth at times."

"If we didn't turn over the ball that score wouldn't have been that close," Jones continued. "We got to fix a lot of things a lot of little details. It really wasn't a good game. Defense bailed us out for sure and we have got to work on it."