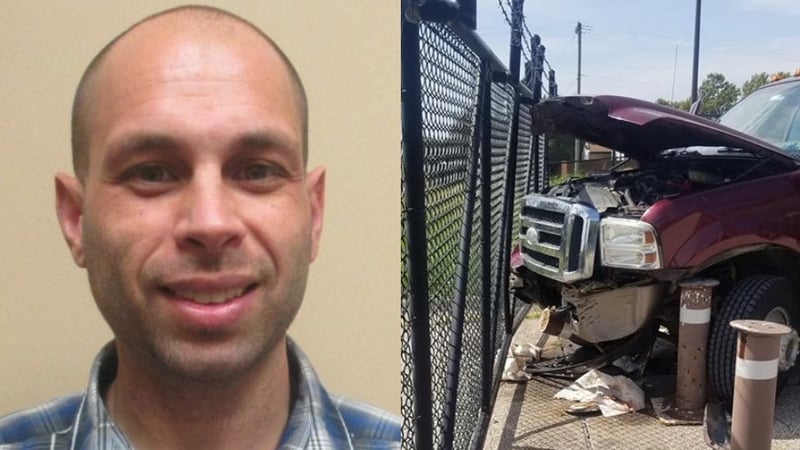 A man is under arrest after authorities say he tried to grab a child at a Derby school, then stole a truck at McConnell Air Force Base.

The incident happened at Wineteer Elementary at around 11:40 a.m. on Tuesday.  A Derby school spokesperson said an unknown man was acting erratically on the playground and tried to grab a student.  Staff members were able to scare the man away from the playground and move the students inside.

Authorities have identified the man as 38-year-old Tyler J. Debarea.

Debarea proceeded to run to McConnell AFB housing where a base spokesperson said he stole a pickup truck. The truck slammed into a gate at the air force base which was reinforced with concrete filled pipes in the ground.

Debarea then jumped the fence and ran on foot. By the time deputies arrived, it was determined that Debarea had a ten minute lead and a search was started within a one mile perimeter.

Shortly after, Dispatch was alerted to a suspicious character walking around 3800 South Webb Road. A deputy made contact with with Debarea and took him into custody. He was booked on charges of kidnapping, battery and criminal threat.

Deputies identified five victims between the ages of seven and eight-years-old and a notification was sent to all parents.

The children were not hurt.

We would like to make you aware of an ongoing situation at Wineteer Elementary. At this time, all students have been accounted for and are currently safe inside the school. Shortly after 12:00PM, an unknown individual was seen on the playground, behaving erratically and attempted to grab a student. The family of the student has been notified. Staff were monitoring students closely and responded immediately, bringing the students into the building. Local law enforcement are on the premises and receiving assistance from McConnell Air Force Base personnel in locating the individual.

Dail Hong
Check out these photos from across KAKEland snapped by our viewers, staff and local officials. Do you have pictures to share with us? Email them to news@kake.com.