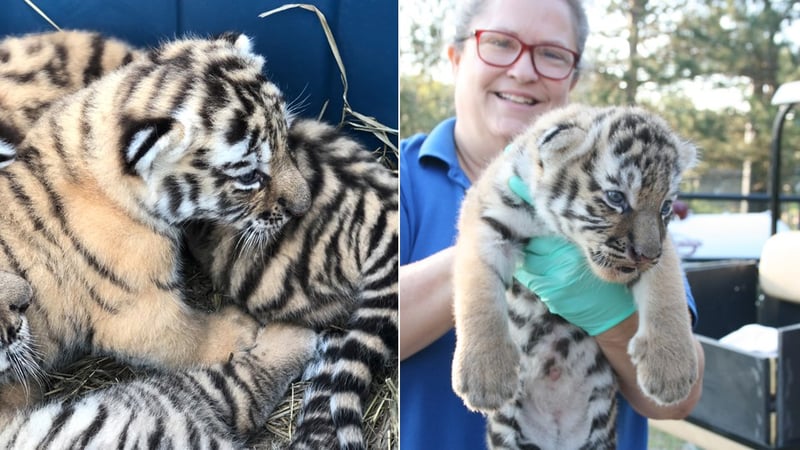 The cubs were born August 14 to mother Andrea and father Dhenuka.

“Since their birth, via the tiger cameras, the animal care staff have been watching these three grow, shared Brenda Gunder, General Curator.  “I feel the male was the first born due to his size from day one. The first born has been on the move and keeping his mother Andrea busy, and has also remained the largest of the three.”

It's the second time the staff has had their hands on the cubs. The first time was just to get a quick look, weigh them and start the process of working with their mother, Andrea, in introducing keepers into the cubs’ space. At that time their weights ranged from 6 ½ pounds to 8 pounds.

During the second exam, the cubs were weighed again and each had gained over a pound, with the male gaining almost two pounds in a week’s time.

“Currently Andrea and her cubs are off exhibit and Andrea will let us know when she and her cubs are ready to venture out to their outdoor habitat,” said Bob Jenkins, RHZ’s Executive Director. “We anticipate that the cubs will be off exhibit for approximately two months, possibly longer.”

The zoo says Amur tigers are classified as an endangered species on the IUCN list.  Parents Andrea and Dhenuka came to the zoo on a breeding recommendation by the Tiger Species Survival Plan developed by the Association of Zoos and Aquariums, of which Rolling Hills Zoo is an accredited member.

At 11 years old, this is Andrea’s third litter. Dhenuka, 9, is a first-time father.