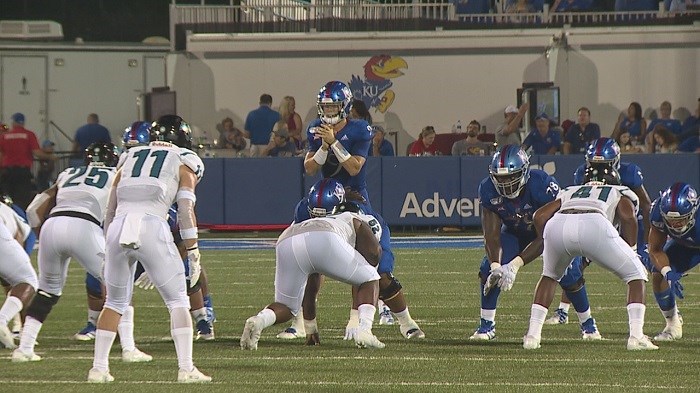 In week one, Carter Stanley led Kansas down field and threw a go-ahead touchdown in the fourth quarter, in a win against Indiana State.

Stanley could've been the hero again in week two, but things didn't quite go the same way.

The Jayhawks were down 12 to 7 in the fourth quarter against Coastal Carolina, and were within striking distance of puling ahead.

On 4th and 4, Stanley scrambled to his right and only picked up one yard. KU failed to convert on three straight fourth downs, and Coastal Carolina won by 5.

On top of that, Stanley only threw for 107 yards and had two interceptions in the loss.

After the game Les Miles said he'd have to go back and look at the tape before making any evaluations, and here's what he saw.

"He was guilty of trying to make plays," said Miles on his fifth year senior quarterback. "It's the right and it's absolutely the wrong thing."

"In his instance, he made a couple of mistakes. I think he's a guy that's accountable. I think he'll step in with opportunity and play well. I'm not going to make a change at this time."