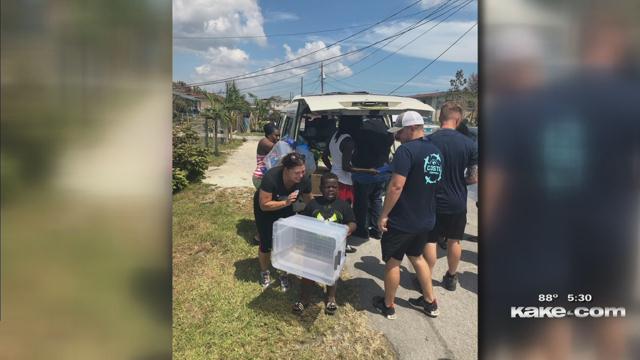 A Wichita woman visited the Bahama's to help residents after hurricane Dorian.

Deanna Irvin said it was a quick decision to go with her friend Dave, that she met while working to help rebuild after Hurricane Harvey in Houston. Before she knew it, she was on a boat with supplies and about 300 volunteers, headed out of Ft. Lauderdale, Florida. She said each volunteer had a specific way to help whether they were doctor's or electricians. When she arrived she said she saw the aftermath first hand, and saw the suffering the people were going through.

According to Irvin, her original plan was to help animals that were in the Bahama's. However, that plan was derailed after the news she heard on the way to help.

"The shelter was gone, completely gone," she said. "There were no animals to save because they didn't make it and even the director of the shelter drowned trying to save the animals too."

Irvin said she only saw five animals, but they were pets owned by people in the Bahamas. She still fed them and then turned to helping people. She found a cab driver who she called, "Mr. C" that took them around to different neighborhoods to deliver supplies. It was at this point that she met several families and children.

"The children, they would just come up and hug you and they were just so happy," Irvin said. "The people were so smiley and huggy."

She got to go inside their homes, where she took videos and pictures and posted them on her Facebook page. In one of them, she said there was a water line around the walls of the house that was a tall as she is. She was also told by the family that they had to hold onto each others clothes to swim out of the house when it flooded.

"I just can't imagine loving something with all your soul and having that just completely ripped away from you," Irvin said.

As Deanna helped there, her daughter Caymen Stockbauer, who is a Freshman at Wichita State University wanted to help here in Wichita. She started taking donations and named her donation booth at Wichita State Hurry to the Furries, in reference to saving animals. Stockbauer said she is taking any donations from flashlights to food to money. If you want to donate you can visit her booth in the Rhatigan Student Center on the university campus, where she will be taking donations until the end of the day Friday Sept. 13.

"Donate everything and anything you can," Stockbauer said.

Irvin said she plans to go back to the Bahamas to help in October, this time with her daughter.