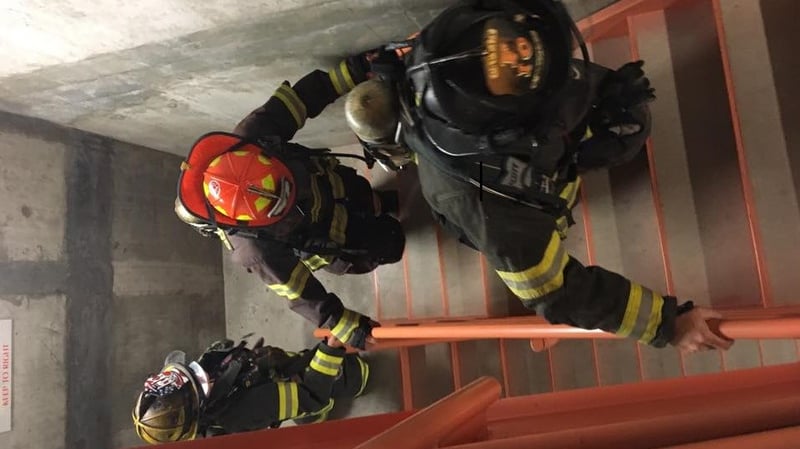 Each climber will bear the name in honor of the 343 FDNY firefighters who died in the terror attacks. It’s an emotional climb, said marketing director Mark Misek. There is a steel beam from the World Trade Center, brought to the site for this event, and each firefighter will touch it as they complete the climb.

To participate, each participant pays a registration fee. There are also sponsors for the event. Proceeds go to the FDNY Fire Family Transport Foundation, which helps serve FDNY firefighters and their families during times of injury, illness or line-of-duty death. FDNY Fire Family Transport is currently assisting more than 900 FDNY firefighters who are battling 9/11–related illnesses, Misek said.

More than 200 firefighters have lost their lives, stemming from illnesses from their time working at the World Trade Center site. A new study shows a link between cardiovascular disease and exposure for firefighters. This summer, President Donald Trump signed a bill, ensuring a victims’ compensation fund related to the Sept. 11 attacks never runs out of money. The fund extends through 2092.

According to the Associated Press, more than 40,000 people have applied to the fund, which covers illnesses potentially related to being at the World Trade Center site, the Pentagon or Shanksville, Penn., after the attacks.

The Wichita stair climb is from 8 a.m. to 2:30 p.m. Saturday, Sept. 7, at the Epic Center – located near 2nd and Main in Wichita. You can find more information at WichitaStairClimb.com.