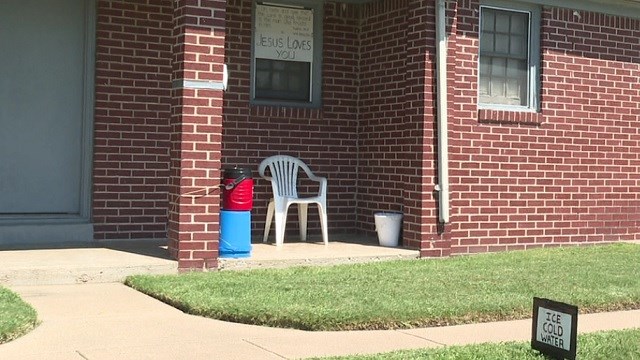 For years, a Wichita man has been offering free cold water and hot soup to strangers. He said he does it to praise God.

"Just give Him all the glory," he said.

The free water and soup sign can be found just east of I-135 and Harry, in south Wichita, and people are noticing it.

"It surprised me. I said, this guy, I know he have nothing. He's very poor and he offer what he has," said Chau Nguyen, the man's landlord.

Nguyen added, "I come and ask him, 'Why'd you do that?' And he says, he wants to pay back. He want to help others and that's what God tell him to do."

Two weeks ago, Diana Frye brought a gift to the man behind the sign. A sign she has seen for years.

But, the man refused the bouquet of flowers and asked the gift be given to a neighbor.

"He was very kind and accepting, but he didn't want the gift. He asked me to take it to another neighbor of his. I thought that was even more incredible of him," said Frye.

She posted the story and the photo and within days more than 7,000 people reacted to it.

"I thought, 'Wow, people really do need a smile,'" said Frye. "Extremely crazy that it just got so big and it was so nice to know that  there were at least 7,000 people that smiled at that story."

Those who know the man describe his work ethic.

"Very hard worker. He never hesitate. If someone come asking for favor, help or anything, he do whatever," said Nguyen. "I wish we can see more people like (him). It's hard to find a person like (him)."

Lily Wu
Check out these photos from across KAKEland snapped by our viewers, staff and local officials. Do you have pictures to share with us? Email them to news@kake.com.