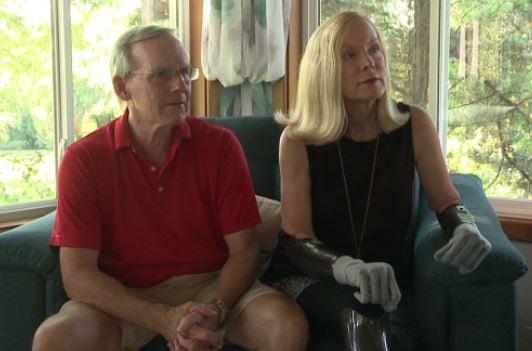 Julie Dombo’s daily routine is a lot more complicated than most people’s. Her myoelectric limbs are vital to her independence and she knows how lucky she is to have them.

Four years ago, Dombo was shot in a cell phone store in Derby. She still remembers the shock and excruciating pain in the moments after the gunman shot her. She remembers fearing she would die, then clinging to life until paramedics could get her to the hospital.

Eventually, doctors told her she would lose both of her hands and her feet – but despite that, she insists on staying positive.

“The support system is so huge here,” she said. “We’re not going anywhere. We’re staying right here in Kansas.

Donors stepped up to pay for her prosthetics – which is a huge cost. Just one of those devices can cost a minimum of $90,000. But over time, she and her husband started meeting with other amputees and grew increasingly discouraged that insurance companies wouldn’t pay for the devices which were critical in their quality of life.

She’s pushing lawmakers to bring the Insurance Fairness for Amputees Act to Kansas.  The Amputee Coalition said that in other states like Colorado, a study of Medicaid programs found an annual savings of $450,000 by offering prosthetic care.

21 other states have similar legislation including Iowa and Missouri. Dombo wants Kansas to be number 22.

She said it’s a chance to use her tragedy to create triumph for other amputees.

“All it says is ‘I, as an amputee, have a right to my medical necessities just like you do,’” she said.

She said she contacted her state representatives last week but hasn't heard back yet. The Dombos plan to travel to Topeka, if necessary, to raise more awareness on the issue.